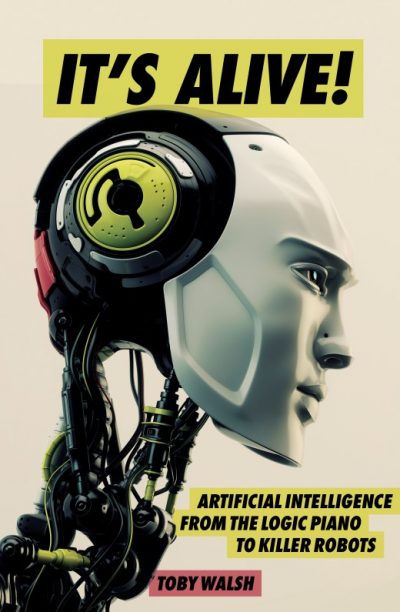 The human brain performs all its wondrous tasks on a mere 20 watts of power. By contrast, the world’s most sophisticated computer, IBM’s Watson, uses 80,000 watts. Will computers ever match the power and cleverness of the human brain? This is one of many questions that Toby Walsh’s It’s Alive! tries to answer. Walsh, a professor of artificial intelligence at the University of NSW, divides his book into three main parts: a history of AI, from Aristotle to Alan Turing to Facebook and Google; an explanation of the current state of AI and how we use it (often unconsciously); and a look into the possible future uses of AI and how our economy and society may be affected. It’s Alive! addresses a broad range of issues in clear and refreshingly non-technical language that is suitable for readers who are looking to explore the subject without being scared off by too much scientific jargon. Will computers ever attain self-awareness? What are the ethical problems of driverless cars? Should we ban the automation of war? How likely is it that automation will lead to high unemployment? Walsh has written a nuanced and thoughtful handbook on an often mystifying subject, raising urgent questions we need to face before a future that is speeding our way suddenly arrives.