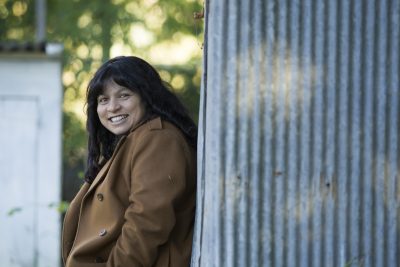 Sulari Gentill (S D Gentill) is the author of the ‘Rowland Sinclair’ mystery series, as well as ‘The Hero Trilogy’, which retells the Iliad and the Odyssey for a YA audience. Her next ‘Rowland Sinclair’ title, A Dangerous Language, will be released in October while her standalone meta-fictional standalone novel, Crossing the Lines, will be published in August (both Pantera Press). Christina Copeland spoke to the author.

Despite their vast differences, your two main series, ‘The Hero Trilogy’ and ‘The Rowland Sinclair Mystery’ series, are both historical fiction. Would you say you prefer writing in this genre?

I do like using history as the scaffolding for a novel. I’ve always been intrigued by the tales that fall between the cracks of the written record for one reason or another and by what might have happened—stories untold until I found them. There’s a special pleasure in weaving these new narratives to fit perfectly into the historical record. Even so I’m not sure I necessarily prefer it to other styles of storytelling. I’ve now written a book that’s utterly contemporary, and I think enjoyed the freedom that gave me as much as I’ve enjoyed writing with the support and inspiration of history.

You did a lot of research into Ancient Greek and Trojan culture when you wrote ‘The Hero Trilogy’. Are mythology and ancient civilisations a passion for you? Will you write anything from around that time period in the future?

Yes, on both counts. I’ve always loved Greek mythology, stories of flawed gods, monsters and heroes; each myth connected to others so that it was impossible to tell just one story. I hope I’ll write many stories in that genre—I do have one completed manuscript in the drawer, another in progress and a couple of ideas awaiting their turn.

You’ve been shortlisted and won many awards for your ‘Rowland Sinclair Mystery’ series. Do you have a personal favourite? Which book of the series would you say you enjoyed writing the most.

That’s a little like being asked to choose between your children! The most recent book always engenders a special fondness … until the next one. But I think I most enjoyed writing Miles off Course simply for the fact that it brought Rowland Sinclair to the High Country where I live. I felt like I was bringing him home to meet the family.

Do you have any advice on writing, editing or the publishing process for aspiring or new authors? Anything that you’ve learned since you started that you wished you knew before?

Write in a manner that suits you, that makes you happy. There is no right or wrong way to create, and rules are of our own making. There is no virtue in agony for its own sake and suffering for your art does not by itself make you a better writer. A writer’s life has many challenges, so if you can find joy in the act of putting one word after the other, however you choose to do it, it’s an easier road to walk.

As far as what I’ve learned—there are so many things, but I’m not sure any of them would have served me before I started. For me part of the magic of writing that first novel was the fact that I had no idea what I was doing, or what I was setting in motion. I was just writing. Knowledge might well have inhibited me.

Where do you get inspiration for the characters in your stories? For example, is Hero or Edna based off of someone or created solely from your mind?

Hero’s character was initially sparked by my husband, who has such poor eyesight he can barely see five feet without his glasses. I found myself wondering what that would have meant to someone in the ancient world, and from that idle thought emerged a weak-eyed girl who could neither wield a sword nor read the stars, but who sought to protect those she loved by petitioning the gods with a fierce and persistent piety. Her brothers, the Herdsmen of Ida, developed as both a foil and complement to Hero. I imbued them with the invulnerability error so typical of adolescent males. They are as irreverent as Hero is pious, as reckless as she is cautious, as gentle as she is fierce. But she protects them as much as they do her.

Conjuring Edna came out of wondering about the kind of woman who could so capture Rowland Sinclair’s heart, that he would remain plausibly devoted for several books. She would have to be his muse, his passion, his equal and most importantly, his friend. A woman so independent that she could be credibly impervious to his charms, so special that readers would understand why Rowland couldn’t and wouldn’t move on, and so delightful that they would forgive her for rejecting him.

Inspiration for characters comes from all sorts of places, from life, from literature, from art. But most of all I think my characters are inspired by the story itself and the other characters that surround them. They are who they need to be for the lives they are about to live.

Are there any other projects on the table at the moment?

Oh, there are always ideas on the table … and beside it, and on the shelves and under the bed. The trick is choosing between them.

I’m currently writing the ninth Rowland Sinclair Mystery. I’ve also begun work on a convict-era novel set in the Rum Rebellion. And of course there are a couple of ancient-world novels awaiting my attention. I do also have a vague but niggling notion that I’d like to write a ghost story.

Aside from novels, I’m working on a stage play in collaboration with my fellow crime writer, Robert Gott.