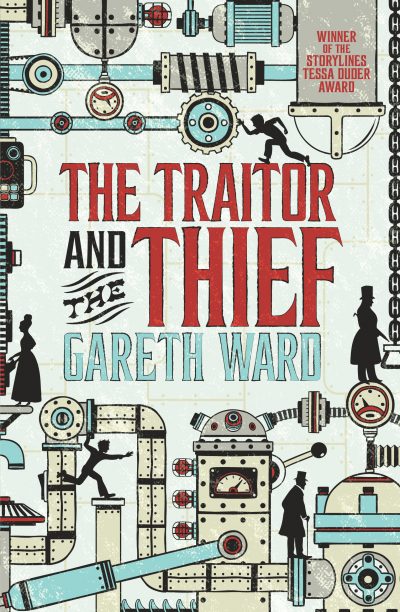 The Traitor and the Thief (Gareth Ward, Walker Books)

In a steampunk alternate England, the life of 14-year-old petty thief Sin changes when he is recruited to join a secret school for young spies tasked with preventing an alternate World War I. There he is trained in stealth, agility, steam technology and weapons, and he makes friends for the first time. But there is a spy at the school, bent on hastening the war instead of preventing it. When Sin is caught up in a mission to uncover the spy, his future at the school, and the school’s own future, hang in the balance. The Traitor and the Thief has many of the most enjoyable elements of the steampunk genre: imaginative and overcomplicated cogs-gears-and-steam gadgets and technologies, quirky names for people and places, and gender equality—both Sin’s best friend and his school rival are girls. The author does less well at imagining an ethnically diverse alternate world, at least in this first book in what promises to be a series. Steampunk as a genre feels a little tired for some adult readers, but this book should delight readers at the younger end of the YA spectrum who enjoy quirky worldbuilding and stories that are more adventure and mystery than coming-of-age and romance (although there are hints of both).