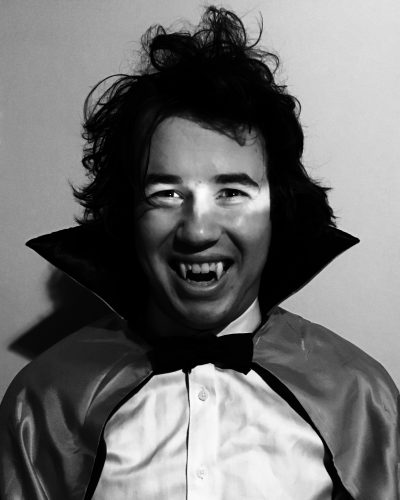 Little book of horrors: Jack Henseleit on ‘The Vampire Knife’

Congratulations on the publication of your first book and the start of an excellent series for dark young minds! How did the tale of The Vampire Knife come about?

Fairytales are my favourite thing to write, and it’s been a joy to flesh one of those stories out into such a dark and spooky novel. The Vampire Knife is built around a horror story I made up one Christmas to scare my little cousin Gypsy, about a girl who hears a strange calling just after midnight, and who can’t resist getting out of bed to investigate. It was about six months later that I realised I could expand the story into a whole book—and so, that initial story became chapter five!

The world of The Vampire Knife is home to some fantastically creepy creatures. Did you draw inspiration from any real cultures or myths to create them?

I did indeed—and I had a very spooky time immersing myself in vampire literature. The vampire in my book is based on a couple of old Romanian legends, which enabled me to recast the classic monster in quite a dark, primal way. I also think it’s important to acknowledge Bram Stoker as the master of the vampire genre; at one point, I was quite pleased with myself for giving my vampire what I thought was an original power, but then I read Stoker’s story ‘Dracula’s Guest’ and realised that he’d already thought of it a hundred years earlier!

Were you conscious of making your story too scary (or not scary enough!) when writing for children?

I was far more conscious of it not being scary enough! I think it’s weird that children know all about monsters, and know how dangerous they can be, and yet have so few stories that show a monster victorious. Like, if a child hero can outsmart or outrun the monster every single time, how does that monster remain scary? The Vampire Knife consciously reintroduces an element of danger and uncertainty that I hope will surprise and enthral the child reader—and which will hopefully make them value the story infinitely more when they reach the (mostly) happy ending.

You mentioned that you wrote this book in the coldest Melbourne winter you’ve ever experienced. Did any other real-life events make it into the story?

When I was a kid, it was a big family tradition for my uncles and aunties to host a treasure hunt at our shared family property at Mt Rowan. One of those uncles had a substantial collection of Halloween costumes, and each year the hunt would see me and my sister facing off against all manner of wicked foes: witches in particular, but also goblins, ghouls, and tricksy faceless men. So, bizarrely, I have very real (and very treasured) memories of fleeing from monsters as they lurched from the shadows to grab me—a ridiculous resource that I am now able to draw on when I write!

Will Max and Anna get to face more spooky adventures in the future?

Yes! Anna and Max are always getting pulled along on the Professor’s work trips, and the decisions they make at the end of The Vampire Knife are sure to come back to haunt them. Book two is set in England and sees the siblings investigating the disappearance of a local boy beside a cold, misty river. I really loved Enid Blyton’s English mystery stories as a kid, and I wrote the sequel as the darkest, most terrifying Enid Blyton book that I could possibly imagine. It’s really fun (and really scary) and I believe it’s coming out in February 2018.

I recently re-read Guess What? by Mem Fox and Vivienne Goodman (Omnibus), and was once again blown away by the lingering spookiness of the pictures and prose. I love witches, and Daisy O’Grady is the most wonderfully Australian witch that I’ve ever come across. An absolute classic!