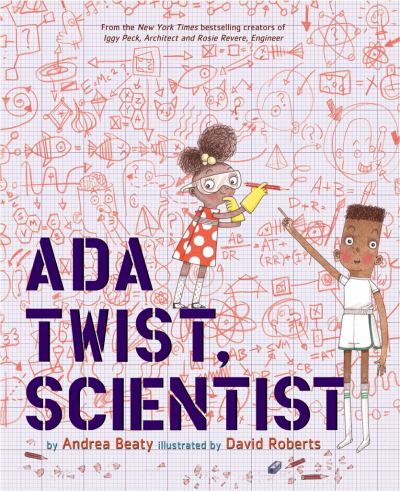 Ada Twist, Scientist by Andrea Beaty and illustrated by David Roberts (Abrams) has won the 2017 Little Rebels Children’s Book Award in the UK for radical children’s fiction, reports the Bookseller.

The winning picture book, about a young girl who can’t stop asking ‘why?’, was described by judge Catherine Johnson as ‘a story where words and pictures work brilliantly together’. ‘Its subject matter shouldn’t be radical but sadly given the nature of the world (of books and in general) it meets all the criteria for this award,’ said Johnson.

Prize coordinator and Housmans Bookshop co-manager Catherine Barter described the protagonist Ada Marie Twist as ‘a true little rebel and, like the pioneering scientists she is named after (Marie Curie and Ada Lovelace), a fantastic feminist role model’.

Beaty and Roberts were previously shortlisted for the award in 2014 for their earlier collaboration Rosie Revere, Engineer (Abrams).

The Little Rebels Children’s Book Award is open to fiction for children aged 0-12 that ‘promotes or celebrates social justice and equality, challenges stereotypes or is informed by anti-discriminatory concerns’. The award was announced at the London Radical Bookfair on 24 June. Also announced was the winner of the Bread and Roses Award for Radical Publishing, which went to Alex Nunn’s exploration of Jeremy Corbyn’s political career, The Candidate: Jeremy Corbyn’s Improbable Path to Power (OR Books).