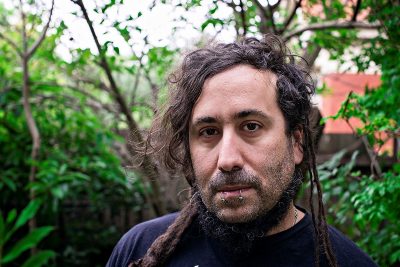 The Fictional Dimension: Bram Presser on ‘The Book of Dirt’

Bram Presser’s The Book of Dirt (Text, September) is ‘a remarkable tale of Holocaust survival, love and genealogical sleuthing by a grandson intent on finding the truth about his grandparents’ past’, writes reviewer Scott Whitmont. He spoke to the author.

Having spent years researching the story of your grandparents’ Holocaust experience, why did you decide to use their incredible story as basis for a novel rather than writing a biography?

I didn’t really have a choice. My grandparents never spoke about it. They went out of their way to ensure we couldn’t find out. All I had to go on was this strange newspaper article, published after they had died, that claimed my grandfather was the literary curator of Hitler’s Museum of the Extinct Race. For the first six years, I was only able to uncover the tiniest shreds of evidence about them. Every time I thought I’d found an open door to their stories, it slammed in my face. And so I began to explore them through fiction instead. The more I got into it, the more I found that I was getting to know who they were, not just what they might have done. Then the Jewish Museum in Prague started digitising their archives and, having been unable to help me earlier, suddenly had all these documents about my grandfather and the secret project he was part of. Around the same time, my cousin found a stash of letters sent by my grandmother from the concentration camps in a shoebox at the back of a closet. But I wanted to stick with the fictional dimension. For me, the book had become just as much about the interplay between ‘fact’ and ‘fiction’ in the way we construct stories about those we love as it was about the people whose stories it purported to tell.

How did you decide how much of the book should be fact and how much fiction?

I’d like to say I had some great plan, but ultimately it decided itself. My search is told almost exactly as it happened. I felt that I needed to be honest about my path to discovering their stories, warts and all. So I’ll always be that guy who broke into a sealed-off area of Auschwitz because it’s where his grandfather was kept. When it came to imagining their stories for the retelling, most of the key events really happened, or at least they happened according to family legend and what was told to various people at different times over the past 70 years. But I needed to make it very clear I wasn’t claiming some kind of absolute knowledge of my grandparents’ stories. I did have to fill in a lot of gaps. In that way, historical narrative nonfiction, to me, can be very problematic. I didn’t want that to become the discussion about my book.

What conclusions have you been left with regarding memory, fate, choice, faith and whether life is beshert (preordained or meant to be)?

More than anything, my understanding of memory has changed. The issue of reliability is far more complex than I’d previously imagined. Actual experience is refracted through so many lenses: the idealised self, the castigated self, the compared self. Then factor in nostalgia and trauma, and what we remember amounts to a kind of storytelling. We become characters in our own stories. And we view others through the same kaleidoscope of perception.

I’ve also become a big believer in dumb luck. Although my great grandfather’s story is a pretty strong warning against relying on it—his gambling ruined his family—my grandparents’ stories in the camps make a pretty good argument for it being a deciding factor in life and death. My grandfather survived, above all else, from a chain of lucky developments from the moment he fled his village. With my grandmother, too, I often stopped and thought, ‘What are the chances…?’ She lived a few doors up from where the paratroopers hid after assassinating Heydrich. She would have known the people who hid them, seen the arrests. Later, she arrived in Auschwitz the night before the uprising—the only act of rebellion in the history of the camp—and was housed right near the gas chamber and crematoria that were destroyed. She witnessed major historical events firsthand and never spoke about it.

As for fate or the idea of beshert, I still tend not to believe. But then I wonder, aren’t luck and fate two sides of the same coin? I might say my grandparents’ survival owed mostly to a chain of lucky events, but someone less cynical might say they were fated to survive.

A plethora of Holocaust stories have appeared as we lose the generation who remember the Holocaust firsthand. You write, ‘We now pay the price for our procrastination’ as unrecorded stories are lost forever. Did you feel a weight of historical responsibility to record your family’s story, and how do you think it differs to other Holocaust testimonies?

We are at a critical historical juncture—soon there will be no more Holocaust survivors. The weight I felt was not so much about documenting the unrecorded stories, but to consider the place and responsibility of the novelist in a post-survivor world. What is left to be told? Are we only now able to confront the taboos, to begin casting survivors as ordinary human beings rather than this idealised superhero archetype that has long been so prevalent? What right do we have to ‘invent’ stories when so many powerful books written by survivors—both fiction and nonfiction—already exist? What can the novelist hope to add to the words of Primo Levi or Elie Wiesel or Viktor Frankl?

I’ve tried my hardest to tackle these questions in The Book of Dirt. The interplay of official documents, photos, letters and other primary materials along with the use of rumours and fragments told to others creates a different reading experience, and invites the reader to think in a way they might not otherwise have considered. Also, given the book is, at heart, about what it means to tell a story, I incorporated a lot of what I consider to be storytelling’s finest form, the fable. To that end, there’s a lot of traditional Jewish and Czech mythology, because is that not what we do with those we love? Make myths of them?