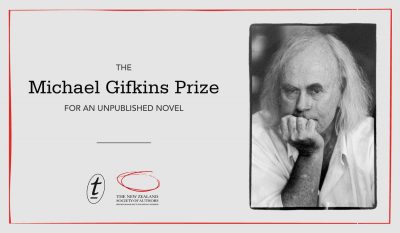 Text Publishing has announced the Michael Gifkins Prize for an Unpublished Novel, a new literary prize for New Zealand writers worth NZ$10,000.

The winner will also receive a contract for world rights from Text. The award honours New Zealand agent and writer Michael Gifkins, with his partner Ann Hatherly and son André Gifkins making a financial commitment to the award.

Hatherly said she sees the award ‘as a fitting way to continue Michael Gifkins’ contribution to writers and New Zealand literature’. ‘After Michael died, we received many emails from writers offering sincere gratitude for the help he had given them,’ said Hatherly. ‘But they also expressed concern about the hole his absence would now leave. It was Lloyd Jones who first suggested that Text Publishing was the “best fit” for the prize because of the huge respect Michael Gifkins had for Michael Heyward and his team.’

Text publisher Michael Heyward said Gifkins was ‘a gifted writer’ and ‘a fine agent, completely committed to the cause of New Zealand literature’. ‘He loved his writers,’ said Heyward. ‘He challenged them, spurred them on, and caught them when they fell. It is an honour for Text to support the Michael Gifkins Prize for an Unpublished Novel.’