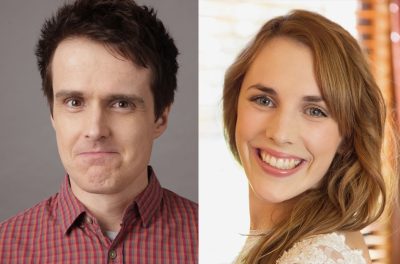 Comedian Andrew Hansen, best known for his work on ‘The Chaser’, and his wife, designer Jessica Roberts, have signed a two-book deal with Walker Books.

The books will be the authors’ first children’s books. The first title is Bab Sharkey and the Animal Mummies: The Weird Beard, a ‘funny adventure story about mummified animals set in an ancient city lost in the Egyptian desert’, to be released in early 2018. It is co-written by the pair and features illustrations by Roberts.

The book follows Bab, a lonely 12-year-old boy who ‘unexpectedly finds the friends he’s always needed: a pair of undead animals wrapped in bandages’, and is transported to the ‘bizarre city of the Animal Mummies’, Mumphis.

Walker Books publisher Linsay Knight said she is ‘delighted to team up with both Andrew and Jess’. ‘From the moment Andrew and Jess first introduced us to Bab Sharkey and the gang, we were hooked and made it our mission to help bring this bandage-wrapped story to young readers everywhere.’

Hansen and Roberts said they are ‘thrilled’ to sign with Walker Books. ‘We took a trip to Egypt in 2009, and were surprised to come across many mummified animals at the Cairo Museum,’ said the authors. ‘They were amazing and terrifying and we wondered what their stories were, and so the idea for Bab Sharkey and the Animal Mummies was born!’