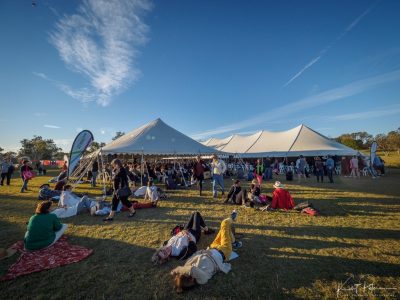 Ticket sales were steady at the 2017 Bryon Writers Festival, which ran from 4-6 August in Byron Bay, NSW, with overall attendance set to repeat last year’s total of 70,000.

While this year’s box office takings are still being finalised, a festival spokesperson told Books+Publishing that approximately 12,000 people attended around 70,000 events across the entire festival.

One-day passes for Saturday’s sessions were sold out, and the festival recorded capacity crowds for several events, including conversations with Richard Roxburgh and Andrew Knight, a discussion with musicians Jimmy Barnes and Tex Perkins on their lives and careers, and a panel with Peter Helliar, Meshel Laurie and Tracey Spicer on ‘How I Got Here’.

In its 21st year, Byron Writers Festival hosted more than 130 Australian and international writers across 117 on-site events, 20 off-site events, 14 workshops, a schools program for primary- and secondary-school students, and a road trip to regional towns. The festival again partnered with the Indigenous Literacy Foundation, and raised more than $8000 for the charity.

Festival chair Jennifer St George described the atmosphere as ‘convivial’, praising ‘the extraordinary work of 200 volunteers who put everything into delivering the best experience possible for our patrons’.

Festival director Edwina Johnson said her highlight was the ‘incredible generosity of the writers’. ‘The connections made at the festival—between the writers and the audience—can be profound. It’s so gratifying to know that visitors will carry stories back to their own communities, extending conversations started at the festival far and wide.’

Mary Ryan’s Byron Bay was the festival bookseller for the third consecutive year. The bestselling books were: