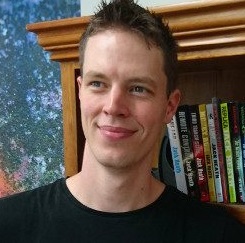 Allen & Unwin has acquired children’s and YA author Jack Heath’s debut adult thriller Hangman, to be published in January 2018.

Hangman is a ‘grisly crime novel about a cannibal detective in Houston, Texas’.

‘Think of the worst thing you can imagine, then go darker. And weirder,’ said Allen & Unwin publisher Jane Palfreyman of the novel. ‘A bulletproof thriller, a mesmerising dissection of aberration and shame and an astonishing, addictive page-turner … Chuck Palahniuk rewrites Dexter with a godalmighty twist that will take your breath away.’

Hangman has already sold into five territories via Clare Forster at Curtis Brown Australia, including HarperCollins in North America, and publishers in Germany, France and Russia. Film and television rights have been optioned to ABC Signature Studios in the US.

Heath is the author of more than 20 novels for children and young adults, including the ‘Danger’ series, the ‘Countdown to Danger’ series and ‘The Mysterious World of Cosentino’, co-written with magician Cosentino.

For more information about the new book, click here.