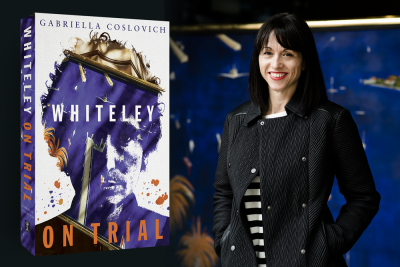 A fine art: Gabriella Coslovich on ‘Whiteley on Trial’

Arts journalist Gabriella Coslovich’s Whiteley on Trial (MUP, October) investigates the twists and turns in the biggest case of alleged art fraud the Australian criminal justice system has seen. ‘The shady world of art dealing is fully exposed in this brilliant piece of writing that will interest true-crime enthusiasts, Brett Whiteley fans and anyone interested in the legal process,’ writes reviewer Clive Tilsley, who spoke to the author.

This is a case where the arts and the law collide. What did you discover about the relationship between these two worlds? And did the legal side intrigue or interest you more than the arts side in the end?

I discovered that the arts and the law are like parallel worlds. As I write in the book: ‘The law and the arts seemed irreconcilable: one beholden to objectivity, logic and absolutes, the other delving into the expansive, indefinite world of human creativity.’ And yet, I found that there is as much art in the practice of law as there is in the creation of art.

I guess that’s why the legal side of the story did interest me far more in the end—it challenged me intellectually and philosophically. The law was unfamiliar to me; I was an outsider to it. I grappled with legal concepts that were not at all absolute. What does ‘beyond reasonable doubt’ mean? What does the law say about overturning a jury verdict? Indeed, what does a finding of ‘not guilty’ mean? I got hooked on reading legal precedents and even the Victorian Criminal Proceedings Manual. I had never really stopped to consider our legal system, despite it being a fundamental part of our democracy. I don’t think I’m alone there. Seeing the law at work fascinated me. What seemed to me a clear-cut case, with photographic evidence of Whiteley-style paintings in progress 15 years after Brett Whiteley’s death, turned out to be nothing of the sort. I was not prepared for the twists and turns to come.

When I started following the case I wondered whether I’d have enough material—or good enough material—for a book. I ended up with more than enough—the challenge, rather, was to shape and edit the mass of material I’d gathered, and to make sense of it.

Can you explain a little bit of the background of ‘art as investment’ in Australia?

People pay huge sums of money for art because they can, in the same way that they might pay huge amounts for seaside mansions, or luxury cars. And just as a luxury car or house can be a status symbol, so too can art—the so-called trophy painting that instantly signals the wealth of its owner.

The value of an artwork—what people are willing to pay—is in many ways a construct. This is not peculiar to the art market—every market is a construct. An artwork’s value can be influenced by its rarity, visual appeal, critical kudos, people’s general desire or attraction to an artist’s body of work, and the hype or buzz that surrounds or is created for an artist’s work. Certain subject matters are more desirable than others; for example, Sidney Nolan’s Ned Kelly paintings are prized, as are Whiteley’s Lavender Bay works.

Artists go in and out of fashion, and their market value rises and falls accordingly. Some artists, however, perform consistently well, such as Whiteley. It’s not a coincidence that the top 10 prices set at auction for Australian art are all for artists who are no longer alive—Nolan, Whiteley, John Brack, Russell Drysdale, Arthur Streeton and Frederick McCubbin. Responses to art can be emotive: in the case of Whiteley, it’s interesting to note that his paintings with a blue palette, for example, are more prized than those with an orange colour scheme.

Whiteley made money from his art during his lifetime—he became wealthy through his work. Artists are usually not so lucky, and for this reason a resale royalty scheme was introduced in Australia in June 2010, to ensure that living artists, and the estates of artists who have died in the last 70 years, receive five percent of the resale value of works costing more than $1000. The scheme was brought into effect particularly with Aboriginal and Torres Strait Islander artists in mind. The scheme is currently being reviewed by the Australian Government.

Did the acquittal in April this year affect the book in any way? Did you have to change anything?

It added a few extra chapters and made for a better plot! Other than that, I was surprised at how few changes I needed to make. After the acquittal I feared I would have to perform major surgery, but because I tell the story chronologically, I was spared having to rewrite extensively since the action is always in the context of what is known at the time. I was fortunate to have the exceptional defamation lawyer Nic Pullen scrutinising my words. Some remarks (not necessarily mine) pushed the boundaries and had to be softened or deleted. The accused’s innocence had to be presumed throughout, and the word ‘alleged’ needed to be used a few more times. Ultimately, I think the acquittal makes for a far more interesting and nuanced book. Readers will make up their own minds about the case.

Wendy Whiteley floats in and out of the story, creating high drama. What influence do you feel she had on the result of the case?

Wendy’s performance, I feel, had a major influence on the jury—and she is a riveting performer. The jurors seemed to listen intently to her testimony and to respect her opinion about the paintings in court and her knowledge of her ex-husband’s artistic style, based on her 50 years of experience with his work. However, her testimony was not held in high regard by the trial judge, and appeared to have no bearing on the decision of the appeal judges. Ultimately, Wendy’s opinion about the two suspect paintings in court was eclipsed by the testimonies of two witnesses who swore under oath that they had seen the paintings in 1988 and 1989. The appeal judges ruled that the testimonies of these two witnesses meant that the jury could not have found the two accused guilty beyond reasonable doubt.

Do you think the alleged ‘fakes’ were good art?

The two paintings at the centre of the trial do not appeal to me. Many people like them—especially the blue—but they are not to my taste. If I had to choose between the two, the orange is the better work, the composition is slightly more interesting and the painting has an eerie stillness. The blue is static in a far more banal way. There’s nothing going on, no movement, no drama, no tension. It’s a chocolate-box work.

Melbourne author Paula Keogh’s The Green Bell (Affirm Press), a wise, poetic and profoundly moving memoir about Keogh’s experience of mental illness, the limits of psychiatry, and the search for meaning.

‘The lost dog poster’: designers on book covers in 2021  Features