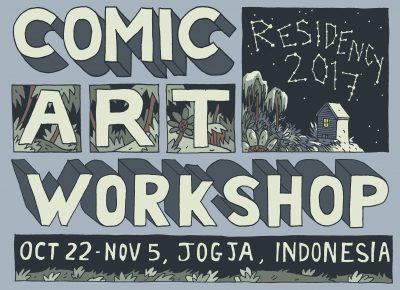 The Comic Art Workshop has successfully raised more than $10,000 on Kickstarter to help fund its 2017 residency program.

The Kickstarter campaign was launched on 11 August and successfully reached its goal of $7000 within 24 hours. The campaign, which ended on 4 September, raised over $11,500.

The funds will be used to run the biennial Comic Art Workshop residency program, which runs for two weeks from 22 October to 5 November at Krak Studio in Yogyakarta, Indonesia.

The residency gives 14 artists from Australia, New Zealand, Indonesia, Malaysia and the US the opportunity to develop their practice and workshop a major project.

Comic Art Workshop will also use the funds to invite US cartoonist Sarah Glidden and Eisner Award-winning Singaporean artist Sonny Liew to the residency to run two master artist sessions.

Comic Art Workshop co-director and University of Melbourne professor Elizabeth MacFarlane said she and cartoonist Pat Grant opted for a Kickstarter campaign to help supplement funding from the Australia Council. ‘When we ran [the Comic Art Workshop residency] in Tasmania in 2015, we were able to run it through the funding we received from multiple competitive national grants,’ said MacFarlane, ‘and there were fewer costs’. ‘This year we received a very generous grant from the Australia Council but missed out on a couple of other grant applications we put in.’

MacFarlane said that without the Kickstarter campaign the project would have run on a ‘shoestring budget’ without the international guests.

The 14 residents selected for this year’s residency are:

MacFarlane said she hopes the residency will help connect Australian artists with the international graphic storytelling and comics community, and has plans to run it again in 2019.

‘We’re trying to get people as networked as possible,’ said MacFarlane. ‘There are not many opportunities for graphic novel publishing in this country. That’s why we bring in our international artists, because there are more opportunities in the US, Asia and Europe.’

For more information about the Comic Art Workshop, and details on each resident’s project, click here.