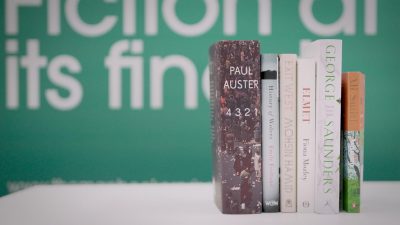 The shortlist for the 2017 Man Booker Prize has been announced.

Chosen from a longlist of 13, the shortlist consists of three debut novels: prolific short-story writer Saunders’ Lincoln in the Bardo, Mozley’s Elmet and Fridlund’s History of Wolves. Though none of the shortlisted authors have previously won the prize, both Smith and Hamid have been shortlisted before, with Autumn making this Smith’s fourth nomination.

This is the fourth year that the prize has been open to writers of any nationality. The shortlist comprises three American writers (Auster, Fridlund and Saunders), two British writers (Mozley and Smith) and one British-Pakistani writer (Hamid).

Chair of judges Lola Young said the final six ‘collectively push against the borders of convention’. ‘Playful, sincere, unsettling, fierce: here is a group of novels grown from tradition but also radical and contemporary,’ said Young.