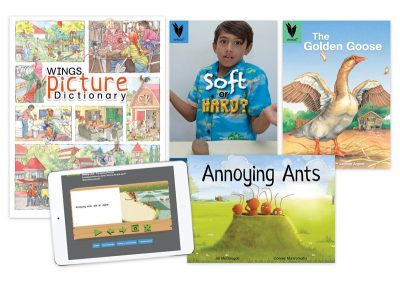 Era Publications, a family owned educational publisher with a focus on English-language teaching, has partnered with Chinese publisher New Century Publishing to publish 1.7 million copies of its ‘WINGS’ children’s reader series in China. Launched at the Beijing International Book Fair, the partnership will see print and digital English-language editions of its ‘WINGS’ series sold into state schools across China for English classes.

Hardie Grant Egmont has acquired world rights to four books in a new adventure series by Sydney bookseller and debut author Jeremy Lachlan following a ‘hotly contested auction’. The adventure series, which is tentatively titled the ‘Jane Doe’ chronicles, is pitched as ‘Narnia meets Mad Max’ for readers aged 11 and up. It follows a ‘feisty teenager as she plunges into a deadly labyrinth between worlds to try to rescue her dad before an “exquisitely vile” villain gets to him first’.

Scholastic Australia has acquired world rights to a new middle-grade fantasy trilogy by historical-fiction author Kelly Gardiner. ‘The Fire Watcher Chronicles’ is a ‘time-slip’ trilogy about a young Londoner, Kit, who is living through the Blitz during World War II, but who also travels back to the Great Fire of London, the Viking invasion of Britain, and the arrival of Boudica and her armies in Roman London. The trilogy was negotiated by Danielle Binks at Jacinta di Mase Management.

Text Publishing has acquired world rights to a new novel by award-winning YA author Vikki Wakefield, which explores the cycle of ‘generational poverty, neglect and abuse’. Youth centres on 16-year-old Nate McKee, a ‘third-generation welfare legacy in a system without a safety net’, who is forced to choose between ‘belonging and resistance’.

Other recent rights sales of Australian books include:

A Pair of Pears and an Orange (Anna McGregor, Scribble)  Junior Reviews

Why Do Tigers Have Whiskers? (ed by Sunanda Creagh, Thames & Hudson)  Junior Reviews