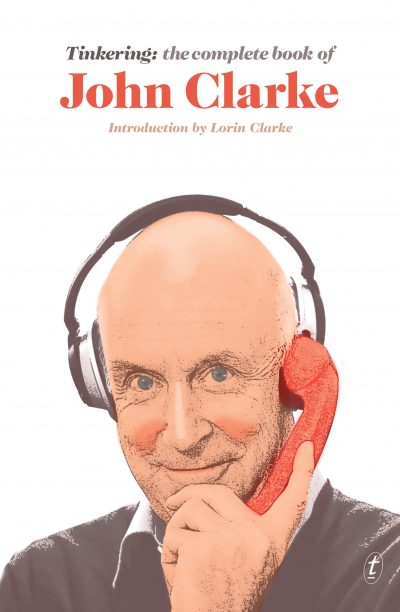 Text Publishing will release two collections by the late satirist John Clarke at the end of 2017.

Tinkering: The Complete Book of John Clarke, which is publishing 27 November, will be a hardcover collection of Clarke’s writing for radio, television and stage, as well as previously unpublished pieces.

The volume comprises Clarke’s Fred Dagg commentaries, including coverage of the fictional sport of Farnarkeling; selections from Clarke’s well-known Age quizzes; his Saint Paul ‘Letters to the Electorate’, which recounted the 2010 ALP leadership spill in the style of biblical verse; and essays from towards the end of Clarke’s life on his family and his early years in London.

Previously unpublished work includes the ‘Doorstop Poems’, a series of poems made from transcripts of interviews given by the nation’s leaders; and an introduction by his daughter Lorin Clarke.

A second book, A Pleasure to Be Here: The Best of Clarke and Dawe 1989-2017, will collect Clarke’s weekly radio broadcasts with Bryan Dawe and the pair’s 28 years of interviews on public and political life in Australia. It will be released 30 October.

Text publisher Michael Heyward said he was inspired to publish the two volumes after talking to Clarke’s family about ‘what we could do to honour his work and his writings’.

‘It’s been a total labour of love to put these together for the past three months,’ said Heyward. ‘Text has published John forever, and he helped shape the company. It would be impossible to imagine our list without his books on it.’