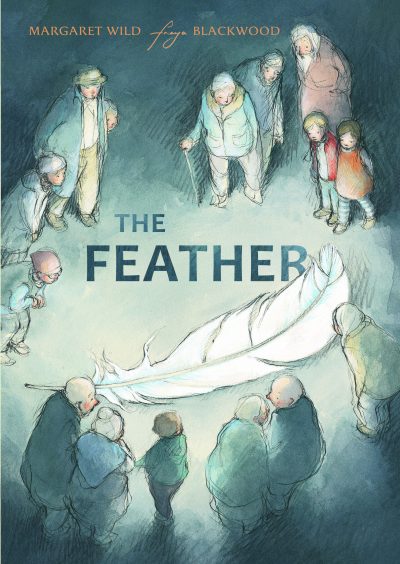 This exquisite and affecting allegory is another masterful Margaret Wild and Freya Blackwood collaboration that is greater than the sum of its parts. Similar to the pair’s previous book, The Treasure Box, The Feather refuses to sanitise a world where darkness and sadness are a reality for so many. The setting is an anonymous ‘every-village’ that is grey with lost hopes (‘Do you remember that?’ asks a townsperson, speaking of sunlight through windows). The bleakness could be post-war, post-apocalyptic or simply the result of hard times; only tiny hints are offered. Young Maria and Nico find a mysterious giant white feather—an incongruously ‘serene and joyous’ object of unknown provenance. They become its guardians in a world where the adults are towering doctors, lawyers and officials whose theories on how to protect this emblem of freedom and possibility are simply wrong. Their suggestions literally contaminate and blacken the feather. Only the children’s dreams can revive and release it. The story remains resolutely open-ended, allowing wide scope for its themes. With sparse narrative and darkly cinematic full-page images, The Feather may overwhelm young audiences, but will prompt deep discussions with older children about world events, emotion and symbolism.

Anica Boulanger-Mashberg is a freelance editor and writer, and a bookseller at the Hobart Bookshop

As Beautiful As Any Other (Kaya Wilson, Picador)  Nonfiction