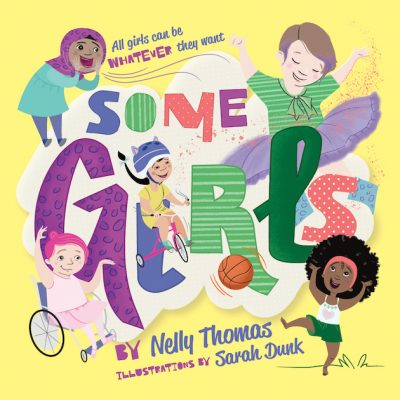 Pozible campaign raises over $20,000 for ‘Some Girls’ picture book

Australian comedian and broadcaster Nelly Thomas has successfully raised $20,925 for her self-published picture book Some Girls in a crowdfunding campaign on the website Pozible.

Written by Thomas and illustrated by Sarah Dunk, Some Girls is an early childhood picture book ‘aimed at challenging gender and other stereotypes’. The book features a diverse cast of girls displaying a range of emotions, likes, dislikes and interests, with the central message: ‘all kids can be whoever they want’.

Thomas said she was inspired to write the book after seeing her daughter struggle to fit the stereotype of how girls should behave. ‘When my little girl was having a hard time, I looked around for books for her and her kindergarten and couldn’t find anything like what I was looking for,’ said Thomas. ‘There are books challenging gender stereotypes out there, but most are for older kids—David Walliams’ books, Rebel Girls—but I wanted a fun and funny early childhood book (for ages zero to five) that was picture-based so girls could see themselves in all their glorious difference.’

Thomas said she decided to self-publish because she wanted to maintain creative control. ‘I didn’t want anyone telling me I had to water down the messaging and with a book like this, there’s always that risk.’

After successfully reaching its crowdfunding target of $20,000 on 4 October, the book is now available for purchase on the Some Kids Books website with individual copies to be shipped in November.

Thomas described the response to the campaign as ‘overwhelming’ and said it prompted offers from three publishers. Thomas chose to partner with Black Inc. for trade distribution, commencing in March 2018 with a print run of 5000 copies. A publicity campaign will be run by Noble Words.

A companion picture book, Some Boys, is planned for August 2018, and Thomas says interest in the title is already high. ‘I’d say more than half of the messages I’ve received have been from parents and carers wanting a boys book,’ said Thomas. ‘There’s no point challenging gender stereotypes and only working with girls. The way we construct masculinity isn’t serving boys well—“man up” is a toxic and unhealthy way to teach boys about being in the world.’