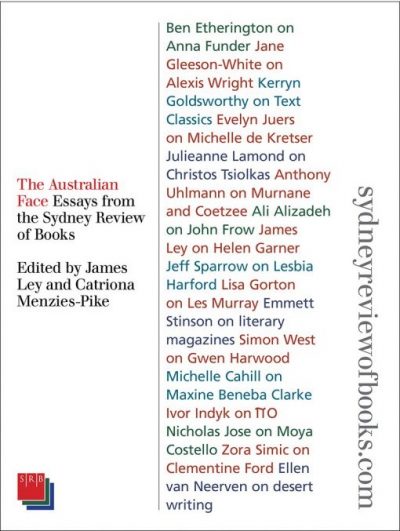 The Sydney Review of Books (SRB) will publish an anthology of essays on Australian fiction, poetry and nonfiction to mark its five-year anniversary.

Essays in The Australian Face, previously published on the SRB website, are ‘contributions to ongoing arguments about the condition and purpose and evolving shape of Australian literature’, said the publisher in a statement.

The anthology, which is edited by Catriona Menzies-Pike and James Ley, includes essays on ‘well-known figures such as Christos Tsiolkas, Alexis Wright, Michelle de Kretser and Helen Garner, alongside considerations of the work of writers who less frequently receive mainstream attention, such as Pi O and Moya Costello’.

‘The Sydney Review of Books was launched in 2013 out of frustration at the diminishing public space for Australian criticism on literature,’ said the publisher. ‘There’s even less space for literature in our newspapers and broadcast media now.’

SRB has published more than 500 essays by almost 200 Australian writers over the past five years.

The Australian Face will be launched on 23 November and is distributed through Giramondo Publishing.