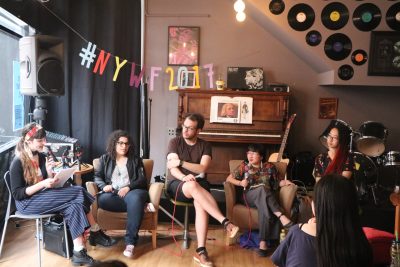 This year, the National Young Writers’ Festival celebrated its 20th anniversary with a four-day program in Newcastle from 28 September to 1 October. Festival manager Stella Charls, coordinator Maggie Thompson and co-director Annie Waters report on the 2017 event and reflect on the festival’s impact on the Australian writing landscape.

The National Young Writers’ Festival (NYWF) is the premier event for young Australian writers between 18 and 35 working in both new and traditional forms, and this year’s festival featured 115 artists from around Australia and New Zealand in over 80 events. It’s one of the best places, given the concentration of talent, for readers and publishers to be looking for the best contemporary writers.

2017 also marked the 20th anniversary of the festival and there were several special events dedicated to NYWF’s history. ‘Alumni Ultimatum’ invited past participants and audience members to speak about the ways in which NYWF had affected their writing or career, and to address the festival’s role in building a community for young writers. The anniversary also gave pause for the festival to consider the history of talented alumni, including household names such as Benjamin Law, Clementine Ford and Matthew Reilly. More recent alumni such as Hera Lindsay Bird, Ellen van Neerven and Jesse Oliver are following closely in their footsteps and establishing themselves in the national literary consciousness.

For many artists, NYWF is their first opportunity to share their work on stage or with a community of peers. Simone Corletto, co-editor of the anthology Crush, says the festival helped her to ‘gain experience in talking about my work in front of an audience—an increasingly important skill in the world of publishing’. ‘Being part of such a supportive and inspirational writing community is one of the most important things a writer in Australia should do (aside from actually writing),’ she says.

By attracting writers from as far afield as Perth, northern Queensland, regional Tasmania and Wellington, New Zealand, the festival also side-steps the literary hubs of Melbourne and Sydney, and allows writers on the fringes to mingle on even footing. At the same time, NYWF continues to engage with the local Newcastle community, aiming to include as many locals as possible in the program.

This opportunity for networking and collaboration feels unique in the literary festival landscape, as the audience and artists are integrated in what is essentially a residential festival. NYWF actively encourages new friendships and creative partnerships, and holds a number networking events over the course of the weekend.

Artists grow to love the festival and continue to return even after they’ve graduated on to the major national and international festivals. Bird arrived at this year’s NYWF hot off the heels of her appearance at the Edinburgh International Book Festival. Another guest this year, YA author Gabrielle Tozer, observes: ‘I always leave Newcastle feeling extra inspired to tackle my next project and read the work of up-and-coming writers.’

This year’s festival held a ‘book baby shower’ for Brodie Lancaster, Julie Koh, Nevo Zisin and James Colley to celebrate the birth of their books in the past year, and to spark broader discussions about how other young writers can get published.

The festival was thrilled to present its Pride Program, a day of events exclusively programed with LGBTQIA+ artists, which was established after the NYWF programming team noticed that almost half of the applications received by the festival were from artists identifying as LGBTQIA+. Continuing its work in this space, the festival has been awarded a FRRR Heywire Youth Innovation grant to create a Young Queer Writers Program in 2018, designed to connect young, queer, rural writers with more established writers from the queer community.

As well as supporting fledgling artists, NYWF is run by a team of burgeoning arts professionals. NYWF has retained the DIY attitude of the first festival that Marcus Westbury spearheaded in 1998, and for many arts workers it is their first chance to program events or help with logistics.

Chair of the NYWF board Shona Barrett describes the festival as ‘a unique and magical professional development space for emerging writers, literary programmers and arts managers’. ‘I see this all the time in my current role as CEO of Melbourne Writers Festival,’ says Barrett. ‘There are people that I work with across the literary and festivals sectors who got their big professional break on the NYWF staff, while so many of Australia’s most exciting literary voices were given their first public stage in Newcastle at NYWF.’

In an industry that can often feel solitary and precarious, NYWF shows young writers and arts workers that it is possible, and worthwhile, to pursue a career in literature in Australia. As editor and writer Roj Amedi observes: ’Writing can often feel incredibly isolating. Like you’re scratching away in some darkened corner. NYWF, in contrast or perhaps in response to that experience, feels like someone has drawn back the curtains and you have an entire plethora of creative people looking back at you, ready to offer insight and guidance.’

NYWF is currently running a year-long donations campaign to support the festival into the future. Members of the bookselling and publishing communities are also invited to apply for the current vacancies for the 2018-19 festivals. Applications to be an artist in next year’s festival will open in February 2018.