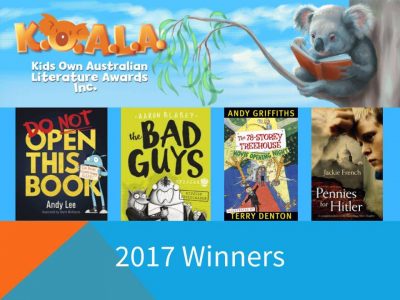 The winners of the 2017 Kids Own Australian Literature Awards (KOALAs), the children’s choice book awards for New South Wales, have been announced.

The winners and honour books in each category are:

The awards were announced at North Rocks Public School in Sydney on 9 November. Winners are selected from the Reading & Enjoying Australian Literature (REAL) Awards shortlist, which also acts as a shortlist for the children’s choice awards in the Australian Capital Territory (COOL Awards), Victoria (YABBAs) and the Northern Territory (KROC Awards).

For more information about the KOALAs, visit the website here.