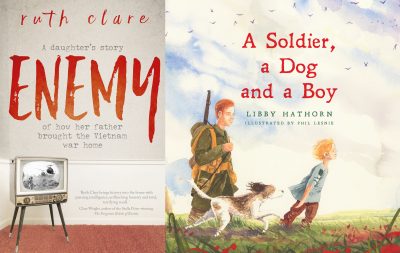 Clare and Hathorn were chosen from a shortlist of five announced in October, and will split the $12,000 cash prize.

Enemy, which explores the consequences of Clare’s father’s return from service in Vietnam, was described by the judges as an ‘emotionally charged, powerful indictment of war and its impact’ that ‘gives strong voice to … the suicides of veterans, post-traumatic stress and the raging turmoil visited on their families as a result’.

The judges also praised A Soldier, a Dog and a Boy for engaging ‘subtly, but powerfully, with a topic that’s inherently anti-war: the impact of conflict on war-orphaned children’. ‘This is an exemplar of how children can be introduced to “difficult” histories in a manner that is both accessible and thoughtful,’ said the judges.

The Asher Literary Award is awarded biennially to a female author whose work has an anti-war theme, and is administered by the Australian Society of Authors on behalf of the Australia Council. This year’s winners were announced at an event in Sydney on 11 November.

The award was last presented in 2015 to Joan Beaumont for Broken Nation (A&U).