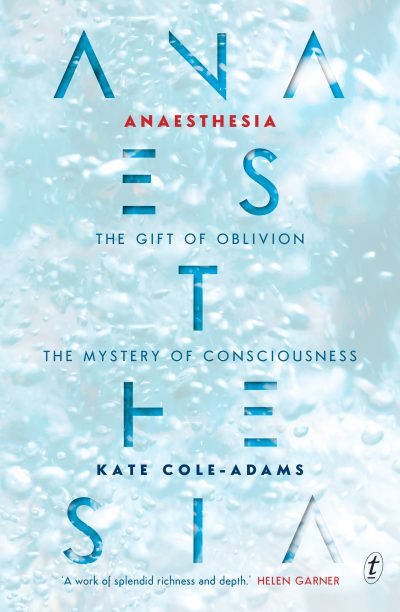 Anaesthesia: The Gift of Oblivion and the Mystery of Consciousness by Melbourne journalist Kate Cole-Adams (Text) has won the Waverley Council’s Mark and Evette Moran Nib Literary Award for 2017.

Head judge Jamie Grant said of the winning title: ‘Kate Cole-Adams has written a book that defies familiar categories. It is a personal memoir, a history, a scientific study, and a philosophical enquiry into the unconscious, and by drawing all these strands together the author has delivered a masterpiece.’

Anaesthesia was chosen from a shortlist of six for the $20,000 prize. Each of the shortlisted authors also received $1000.

Ashleigh Wilson’s Brett Whiteley: Life, Death and the Other Thing (Text) won the People’s Choice Prize, worth $1000, and David Dufty’s The Secret Code-Breakers of Central Bureau: How Australia’s Signals-Intelligence Network Helped Win the Pacific War (Scribe) picked up the Military History Prize, worth $3000.

The Waverley Council Nib Literary Award was established in 2002 to recognise the role of research in fiction and nonfiction. The Military History Prize was initiated in 2015, with the support of the Bondi Junction, North Bondi, and Rose Bay RSL sub-branches, to recognise a work that ‘illustrates the service and sacrifice of Australian service men and women, families or the broader home front, during or in relation to any threat of war’.

For more information about the award, visit the Waverley Library website here.