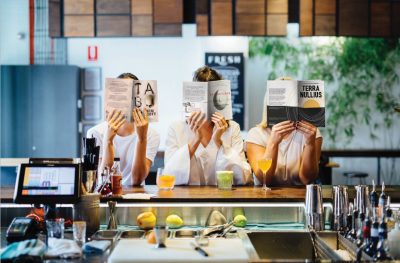 The full program has been announced for the 2018 Perth Festival Writers Week, which runs from 19-25 February.

Events at the festival include the pairing of ‘literary giants’ Kim Scott and Helen Garner in a discussion on ‘why literature matters’; a preview of Tim Winton’s forthcoming novel The Shepherd’s Hut (Hamish Hamilton); dining events, such as breakfast with Miles Franklin-winners Josephine Wilson, Michelle de Kretser and Sofie Laguna and lunch with UK writer Alan Hollinghurst; and writer and photographer William Yang’s closing address on his career working with words and images.

Architecture receives a special focus in this year’s program, including guided heritage walks and a retrospective of documentaries by filmmakers Ila Bêka and Louise Lemoine.

Children’s events include mural activities with Indian small press Tara Books; family activities in the ‘Paper Bird Kombi’, run by Fremantle children’s bookshop Paper Bird; and the ‘Curated by Kids’ program, a series of sessions staged with the involvement of 10 guest curators aged 10-12.

The 2018 program is curated by West Australian literary editor William Yeoman, who was appointed guest curator following the departure of long-time program manager Katherine Dorrington in 2017. The event has been extended from four days to a full week, and will be based in a new hub located at the University Club of Western Australia, as well as extending to libraries and bars in Perth. Boffins Bookshop will be the official bookseller.