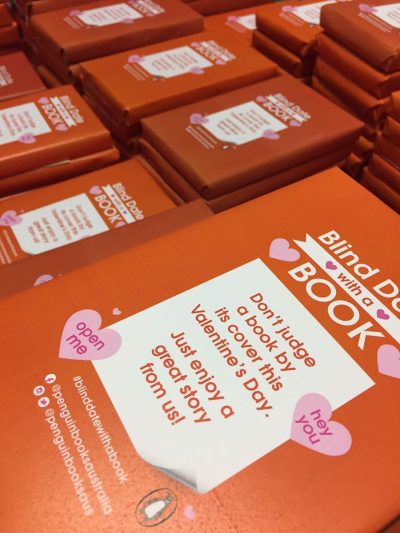 Penguin Random House Australia has partnered with Books on the Rail and the Street Library to launch a ‘blind date with a book’ campaign to coincide with Valentine’s Day.

The campaign involves wrapping copies of PRH’s local and international paperback titles in orange paper, and dispersing them on public transport in Melbourne, Sydney and Brisbane, and in more than 50 street libraries around Sydney.

PRH are also promoting the campaign on social media with the hashtag #blinddatewithabook.

Publicist Ali Hampton said the the campaign challenges ‘pre-conceived notions about authors, genres and even coverwork’.

Hampton told Books+Publishing the campaign was aimed at drawing in a broad audience: ‘We wanted to reach people who would be commuting, and those who might not traditionally know what a street library was, or that there was one in their area.’

Asked about the response to the campaign, Hampton said it has been ‘overwhelming’ so far, and the publisher is already setting its sights on 2019. ‘The response has been incredible, from media, authors and readers alike; we absolutely have plans in place to make 2019 even bigger and better. We want to increase our reach across Australia, in metropolitan and regional areas, and want to partner up with additional organisations to help promote the love of reading—we’ve already had some reach out to us.’