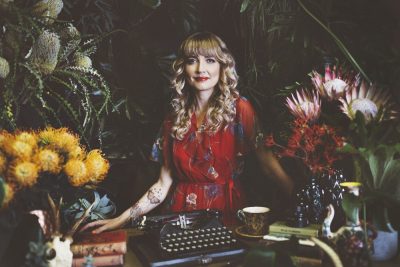 Stories are a lifeline for your heroine, Alice, especially in her youth. What was your relationship to reading when you were a child?

I was lucky to have a mum who starting reading stories to me when I was six months old. Her commitment to my literacy meant I was reading when I was three. Once I learned to write, I started making my own books, and when I was 11, I learned to type and discovered a way to keep up with the stories in my head, without hand cramps. Wherever we lived, Mum took me to the public library; filling my book bag was a kind of magic that has never worn off. I think the books we connect with as children can be as powerful as first love: we never forget them.

How did your own experience living in a remote Indigenous community inform your portrayal of the desert and the people who live and work there?

All the settings in the novel are informed by places and people I’ve known and loved. My experience of growing up on the southeast Queensland coast informed my portrayal of Alice’s childhood seaside world as much as my experience of living in central Australia informed my portrayal of Alice’s life in the desert. I don’t feel I could have written any of this particular book without firsthand sensory knowledge of and connection to the landscapes and people I’ve fictionalised. To me, fiction is emotional truth; this novel is wholly drawn from some level of experience I’ve had in my life.

One of the most memorable items in the novel is the Thornfield dictionary, where meanings of Australian native flowers have been recorded by Alice’s ancestors. What was your process of creating this item?

I spent the first years of my life playing in my grandmother’s abundant garden that grew alongside her house. As I grew up I watched my mother turn to coaxing flowers from dirt in her own garden. After I moved to England in 2009 to do my creative writing MA, I was researching for another story when I came across the Victorian language of flowers. As I read about this 19th-century floral craze, a spark came to life in my mind. It remained there, flickering in the background, until 2014 when I started writing Lost Flowers and the spark ignited. I knew from being in the gardens of the women who raised me that Australian flora often thrives under harsh conditions, in extreme landscapes and weather. Thornfield and its language grew from there. Poring over books and botanical art, pairing native flowers with meanings was a deep source of wonder and light while I was writing the darker, more harrowing parts of this novel.

The first chapter of this novel won Griffith Review’s writer award in 2015. How instrumental was this award and the residency that followed in shaping the book?

I submitted the first chapter of Lost Flowers to Griffith Review’s annual writer award, terrified of sharing my work, being seen, having my fiction judged by a publication I revered. When I was told I’d won, it felt bigger than I could comprehend: the validation and encouragement that came with winning was life-changing. In December 2015 I sat awestruck in a taxi as it crunched up Varuna’s driveway and delivered me to the yellow writers’ house I had coveted since my teens. I was allocated Eleanor Dark’s room to write in, and I spent the first afternoon staring through the window at the gum trees totally flabbergasted. Then I got down to work. Being at Varuna was transformative. Winning the award and residency fortified my courage to commit to whatever it took to see Alice through her story, which I continuously drew on in the two years of rewriting that followed.

What do you hope readers will come away with after reading The Lost Flowers of Alice Hart?

My hope is that Lost Flowers gives readers the sense of companionship and wonder only books can give. And that it is possible to have agency in our own lives, if we can find the courage to try. Most importantly, I hope readers come away feeling that it is possible to do the hardest thing: love and respect ourselves enough to live our own stories rather than ones circumstance/stigma/other people give us.

The Museum of Modern Love by Heather Rose (A&U) is everything: art, love, fear, connection, magic, life, hope and death. The way it felt to read harked back to my girlhood when I thought if I held a book tightly enough it might not end.