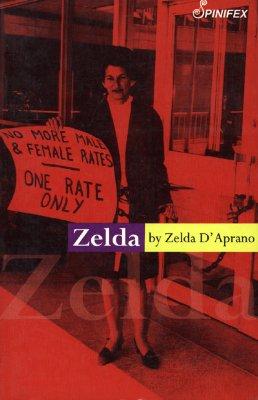 D’Aprano was an avid campaigner for women’s rights and equal pay. A fierce labour unionist, she is known for securing herself to the doors of the Commonwealth Building in 1969, to protest the dismissal of the Australasian Meat Industry Employees Union test case for equal pay.

D’Aprano was also the author of an autobiography, Zelda, which she originally self-published before Spinifex Press reissued it in 1995.

‘I met Zelda D’Aprano in 1974 when I was volunteering at the Women’s Liberation Centre on Little La Trobe Street, which Zelda helped to establish. Zelda was a force to reckon with. Growing up in a working-class Jewish household in Carlton, with a mother who joined the Communist Party, meant that Zelda was deeply political. She understood from her own and others’ experiences how power worked. Zelda left school before her 14th birthday and worked in underpaid positions in factories. After joining the Communist Party in 1950 she worked as a dental nurse at Larundel Psychiatric Hospital. By 1969 she was a clerk at the Australian Meat Industry Employees’ Union (AMIEU).

‘In 1969, a test case on Equal Pay was brought before the courts. Women around the country watched, but few acted. When the case failed on 21 October 1969, Zelda chained herself to the doors of Commonwealth Building during her lunch break. On 31 October, she repeated this, along with Thelma Solomon and Alva Geike who also chained themselves to the doors of the Arbitration Commission. These three women went on to set up Melbourne Women’s Liberation, paid just 75 cents in the dollar on trams and, along with others, participated in pub crawls to protest women being excluded from bars.

‘She self-published her autobiography, Zelda in 1977 which Spinifex reissued in a new edition in 1995. In 2001, her biography of Kath Williams, another campaigner for equal pay, was published by Spinifex. She received a Doctor of Laws, honoris causa, from Macquarie University in 2000.’