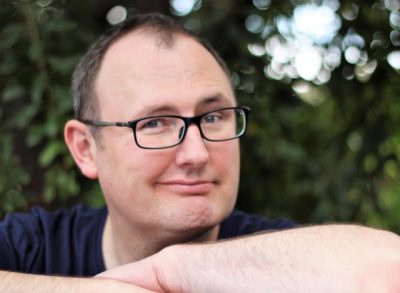 The new normal: Adam Cece on ‘The Extremely Weird Thing That Happened in Huggabie Falls’

Adam Cece won the 2017 Text Prize for The Extremely Weird Thing That Happened in Huggabie Falls (Text, April). Reviewer Holly Harper describes it as ‘a funny read full of hijinks and adventure’ with a narrator reminiscent of Pseudonymous Bosch. She spoke to the author.

Congratulations on winning the Text Prize last year! What was the experience like?

I was working from home when I got an email from Text saying the publisher and the senior editor wanted to arrange a time to talk to me on the phone. I knew that was probably a good sign—I knew Text publishers and senior editors probably didn’t just ring every single person that entered the Text Prize to tell them they’d lost. When they rang later on and told me I’d won, I think initially I was in shock. I immediately rang my wife and told her the news.

What was the first kernel of an idea for the book?

Many years ago, I was driving into a town in the Adelaide Hills—I can’t remember which one, and I haven’t been able to find it since. I passed a ‘Welcome to’ sign, and the last digit of the population figure had been scribbled out and replaced with one number less, and then that number, at some obviously later date, had been scribbled out and replaced with another number less. It was probably just a local vandal, but I preferred to imagine that some dutiful citizen had taken it upon themselves to ensure that the sign was always accurate, racing out with a slopping tin of paint and a paintbrush whenever some local resident dropped dead or left town. The idea of a town where something weird like this happened amused me. And over the ensuing years I started to imagine a town where these sorts of weird things happened all the time, so much so that weird became normal.

There are a lot of weird things in your book—from Dutch werewolves to vegetarian piranhas. Was there anything too weird to make the cut?

It’s so much fun coming up with weird things and weird people to live in Huggabie Falls. Anything that didn’t make it into the first Huggabie Falls book is finding its way into book two (The Unbelievably Scary Thing That Happened in Huggabie Falls, October) and book three (2019) in the series. The weirdness is only just beginning.

Huggabie Falls is full of the kind of irreverent comedy that kids love. Does a youthful sense of humour come naturally to you?

I’ve always had a silly—and some might say warped—sense of humour. My motto is: life’s too short to take anything too seriously. I read books for all ages, and I read a lot of kids’ books, not just to get a feel for my audience but also because I love them.

What’s the most ‘Extremely Weird Thing’ that has ever happened to you?

When I was younger, I fell and dislocated my elbow and I had to have surgery to un-dislocate it. When I woke up in hospital, I must have had a weird reaction to the anesthetic, because I had lost my memory. For about two hours I couldn’t remember who I was, where I was or anything about my life. It was a weird feeling, but I wasn’t freaking out—I was just lying there and not remembering anything. The nurses kept asking me if I could remember anything yet, and I would say no, and they would say they would come back and check in another 15 minutes. Of course, my memories did eventually come back … or have I just been pretending they did ever since?

About six months ago I read the YA book Illuminae by Amie Kaufman and Jay Kristoff (A&U), and I absolutely loved it. At the moment, I’m reading a middle-grade book that has got me totally hooked: Time Travelling with a Hamster by Ross Welford (HarperCollins). It is a brilliant book.