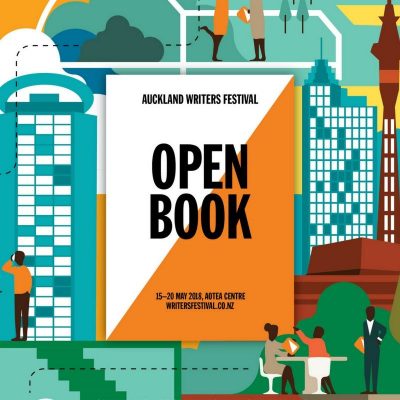 The program for the 2018 Auckland Writers Festival has been announced.

In total, more than 230 writers will take part in the six-day festival. Some highlights from the program include a gala evening of performances by eight writers; a lunch with British philosopher A C Grayling on the state of Europe; a literary quiz night; ‘A Māori Word a Day’, a daily morning lesson teaching Māori words; ‘Call on O’Connell (Street)’, where 30 writers publicly perform spoken word games and theatre; and a free family day on 20 May.

The festival also includes the 2018 Ockham New Zealand Book Awards ceremony on 15 May and the winners’ announcement for the inaugural Michael Gifkins Prize, funded by Gifkins’ family and Australian publisher Text Publishing, on 19 May.

The schools program will run from 15 to 17 May, and will feature former UK children’s laureate Chris Riddell, UK author Alex Wheatle, US authors Bonnie-Sue Hitchcock and A S King, and New Zealand writers Gavin Bishop, Selina Tusitala and more.

Auckland Writers Festival director Anne O’Brien said she is ‘thrilled present the Festival’s most diverse line-up of writers yet’. ‘The last few years has seen unprecedented interest in the Festival from audiences who travel not only from all over Auckland, but around the country and abroad to listen to globally lauded writers and ideas,’ said O’Brien.

Tickets go on sale on 16 March. To view the program, click here.