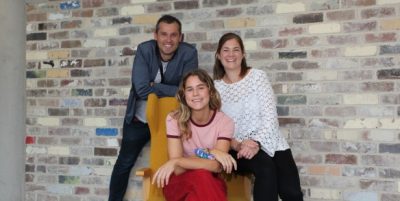 Chosen from a shortlist of three, Quirky Kid won the award for Basecamp, an anxiety program for seven- to 12-year-olds in which children embark on a journey through a fictional Australian national park to help explore their emotions. Basecamp was also shortlisted for the Educational Learning Resources Award.

In their comments, the award judges said, ‘Now more than ever children and families need resources like Quirky Kid’s Basecamp. This engaging, child-centred approach would make a real difference in building children’s resilience.’

Quirky Kid co-founder and publisher Leonardo Rocker said it was ‘an honour to receive the award for such an important project and initiative’. ‘Basecamp was developed to assist young people to manage their anxiety in the school and home setting,’ said Rocker. ‘Anxiety is one of the most common childhood mental health presentations and is on the rise.’

The award caps off a European tour that has seen Quirky Kid attend both LBF and this year’s Bologna Children’s Book Fair, and Rocker said the international reception ‘could not have been better’. ‘We met with global publishers, government representatives, private organisations and parents. There is a clear understanding of the importance of the resources Quirky Kid produce, and we received a lot of encouragement and feedback that we are on the right path.’

‘Our titles are not conventional for trade publishing,’ said Rocker. ‘However, the more specialised publishers are really engaged with [our publications] and are considering utilising our materials globally.’

Rocker added that the publisher has ‘some very interesting new projects coming up’, including digital projects. ‘We have identified the unique place we can occupy in the trade publishing industry due to the position we hold as a child psychology clinic and publishing house.’

The LBF International Excellence Awards, which are held in partnership with the UK Publishers Association, are presented in 17 categories, with this year’s winners announced at a ceremony on 10 April.