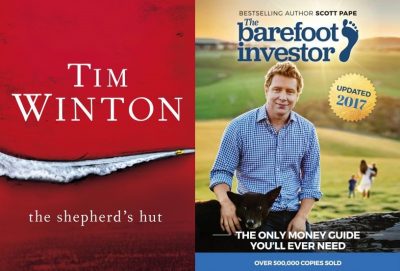 Tim Winton’s first novel in five years, The Shepherd’s Hut, was the bestselling fiction title in March, after debuting in 11th spot in early March and remaining in the overall top five for the past four weeks.

Several first-time female novelists have books in the March fiction bestsellers chart, led by Heather Morris’ The Tattooist of Auschwitz in second spot, continuing the book’s run of success after it debuted top of the February bestsellers chart. Dervla McTiernan’s debut crime novel The Ruin is right behind in third spot on the chart. The first instalment in a planned series about an Irish detective, The Ruin went to a reprint a week after its release and has sold rights into the UK, Ireland, Germany and the US. Finally, The Lost Flowers of Alice Hart, Holly Ringland’s debut which has sold into 19 territories, has climbed into 10th spot, despite only being released in the second half of the month.

Silent Invasion by Clive Hamilton has debuted in the Australian nonfiction bestsellers chart in March in second place. Hamilton’s exploration of the influence of the Chinese Communist Party in Australia was acquired by Hardie Grant after rights were returned to Hamilton from former publisher Allen & Unwin. Scott Pape’s The Barefoot Investor, which has topped the weekly bestseller charts since the start of January, has again taken the top spot.

‘The Fast 800 Keto’ debuts at number one  Bestsellers