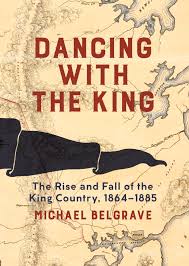 Michael Belgrave has won the 2018 Ernest Scott Prize for history for his book Dancing with the King: The Rise and Fall of the King Country, 1864-1885 (Auckland University Press).

Belgrave’s book was chosen from a shortlist of four, which included Juridical Encounters: Māori and the Colonial Courts, 1840-1852 (Shaunnagh Dorsett, Auckland University Press), Indigenous and Other Australians since 1901 (Tim Rowse, NewSouth) and Hidden in Plain View: The Aboriginal People of Coastal Sydney (Paul Irish, NewSouth).

The $13,000 prize is awarded annually to a work based on original research that contributes to the history of Australia or New Zealand or to the history of colonisation. The prize is presented by the University of Melbourne’s Faculty of Arts, in conjunction with the Australian Historical Association.

As previously reported by Books+Publishing, Tom Griffiths won last year’s prize for The Art of Time Travel: Historians and Their Craft (Black Inc.).