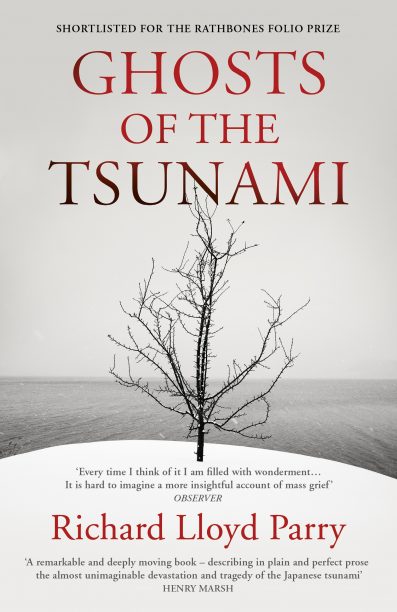 Parry wins Folio Prize for ‘Ghosts of the Tsunami’

In the UK, Richard Lloyd Parry has won the  £20,000 (A$34,610) Rathbones Folio Prize, relaunched last year, for Ghosts of the Tsunami: Death and Life in Japan’s Disaster Zone (Vintage).

Judges praised Parry’s literary nonfiction book for being ‘a piece of heightened reportage about the 2011 Japanese earthquake and its devastating aftermaths, rendered as great literature’. ‘Here is a book which not only interprets for a non-Japanese reader the subtleties and complexities of that nation’s life, especially its family life and how it copes with grief, but also has the depth and reach to close the gaps between other nations, other cultures,’ said the judges.

Ghosts of the Tsunami was chosen from a shortlist of eight that included Anything Is Possible (Elizabeth Strout, Viking); Conversations with Friends (Sally Rooney, Faber); Exit West (Mohsin Hamid, Hamish Hamilton); Once Upon a Time in the East: A Story of Growing Up (Xiaolu Guo, Vintage); Reservoir 13 (Jon McGregor, HarperCollins); The Day That Went Missing (Richard Beard, Vintage); and White Tears (Hari Kunzru, Hamish Hamilton).

The Rathbones Folio Prize is awarded to the best work of literature, regardless of form, written in English and published in the UK, and was originally launched in 2013 as a challenge to the Man Booker Prize. The prize was suspended in 2016 after the Folio Society’s two-year sponsorship of the award came to an end. It was previously only open to works of fiction, and was expanded to include nonfiction when the prize relaunched in 2017.