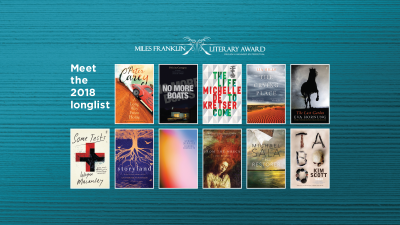 The longlist for the 2018 Miles Franklin Literary Award has been announced.

The 11 longlisted titles are:

‘The longlist for the Miles Franklin Literary Award 2018 spans many genres of the novel: historical, fantastical, realist, satirical, allegorical and autobiographical,’ said State Librarian of NSW Mitchell librarian Richard Neville, speaking on behalf of the judging panel. ‘The books take us back in time to consider the effects of the past, or address the issues of contemporary life, or give glimpses of an uncertain, even frightening future.’

‘Whether dealing with disconnection, dispossession, the many varieties of grief and its resolutions, the violence done to those close or those unknown, or the deeper questions of existence, the eleven longlisted novels engage and reward the reader,’ said Neville.