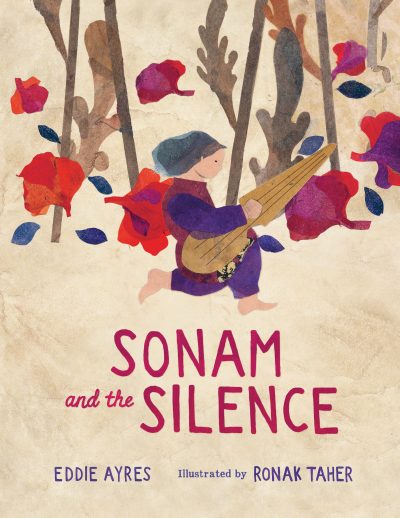 A fable about a young girl in Kabul during the Taliban occupation hardly sounds like the stuff of picture books so Sonam and the Silence was warily approached. However, fear not, this is a children’s book after all, and though there are grim aspects, there is hope and renewal as well. Seven-year-old Sonam’s dreary world is made up of chores, helping her family work at the market and selling chewing gum to passing cars. One day, as she runs into the forest, she hears a whispering sound and sees an ancient man cradling an instrument in his lap. He is making music, a sound forbidden in the country. Sonam sneaks out frequently to listen to the music. She comes to learn that, like a pomegranate tree, music needs nurturing and love to thrive and give fruit. But the chaos of war soon intrudes and Sonam’s own instrument—gifted to her by the old man—is confiscated by her brother. This story of how Sonam eventually discovers the powerful and transportive nature of music is beautifully rendered in both words and images. Illustrator Ronak Taher’s colours are earthy, with a predominance of browns, yellows and russet reds, and Eddie Ayres has drawn on his experience teaching music in Afghanistan to produce this quietly moving book for children aged seven and up.