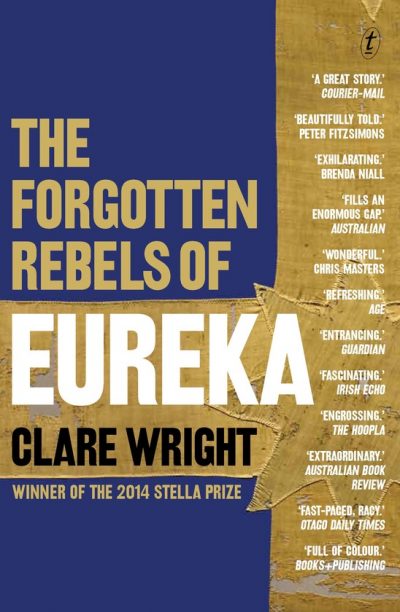 La Trobe University has invested $200,000 in a TV series adaptation of Clare Wright’s book The Forgotten Rebels of Eureka, reports the Age.

Money from the university’s Strategic Innovation Fund will pay for a treatment (series outline) and pilot script to be adapted from the book, which tells true stories of women during the 1854 rebellion, for an eight-part TV drama series.

Hollywood screenwriter Anne Kenney, who previously worked on series such as Outlander, ER and LA Law, has been announced as writer and executive producer, and will fly to Melbourne later this year.

Wright, who will also be a co-producer, said it could be ‘the first time that any Australian university has entered the entertainment industry’. She said universities usually think about commercialising research in biotechnology, pharmaceuticals or IT, ‘but there is so much tremendous work that comes out of the humanities—interesting ideas that can be translated into cultural outputs that you can take to market’.

The film and television rights were optioned in late 2015 by Ruby Entertainment, a Melbourne company that previously produced the miniseries adaptation of The Secret River (Kate Grenville, Text).

The Forgotten Rebels of Eureka was published by Text Publishing in 2014 and was awarded both the Stella Prize and the Waverley Library NIB Award for Literature in that year.