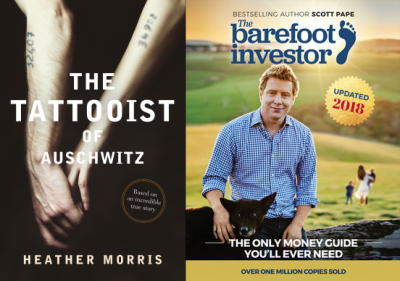 ‘The Tattooist of Auschwitz’ and ‘The Barefoot Investor’ top Australian charts

Heather Morris’ novel The Tattooist of Auschwitz—based on the true story of Lale Sokolov, who met his future wife while working as a tattooist at the Nazi concentration camp Auschwitz-Birkenau—has returned to the top of the Australian fiction bestsellers chart in June. Another World War II-set story has also entered this month’s bestsellers in third spot: James Moloney’s The Love That I Have tells the story of a young German girl working in the mailroom of Sachsenhausen concentration camp, who begins to read and rescue the prisoners’ letters she has been ordered to burn.

Rising star writer Bri Lee’s nonfiction book Eggshell Skull is one of the newcomers in this month’s Australian nonfiction bestsellers chart. Lee’s book explores the Australian legal system through the prism of her own experiences as the daughter of a policeman, a law student, a judge’s associate and finally as a complainant in her own case. Another new entrant in the chart is Australian entertainer and radio presenter Tanya Hennessy’s ‘A-Z guide to adulting’ Am I Doing This Right?