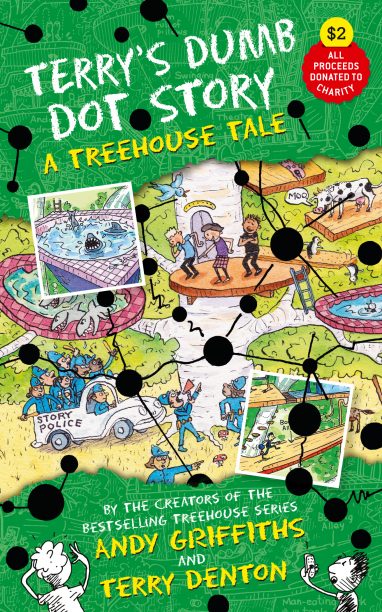 Andy Griffiths and Terry Denton, in partnership with Pan Macmillan Australia, have donated $141,613 to charity from the sale of their short story Terry’s Dumb Dot Story.

Published on 27 February, the 64-page ‘Treehouse’ story was sold for $2 (including GST) in Australia and New Zealand. The full RRP amount for every copy (excluding GST) has been donated to range of children’s charities, including the Indigenous Literacy Foundation ($84,510) and Dymocks Children’s Charities ($35,525) in Australia, and the KidsCan Charitable Trust ($6000) and Oxfam ($10,826) in New Zealand.

Griffiths and Denton said, ‘We are very happy that all the money raised from our silly little book will be used to make a big difference to children in need.’

Pan Macmillan expressed thanks for the donation of content, time and services from the two authors, Alliance Distribution Services, Opus Printing Group and the retailers involved.

The announcement coincides with release of The 104-Storey Treehouse, the most recent book in ‘Treehouse’ series.