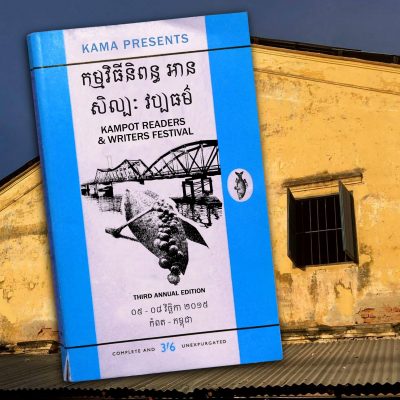 In Cambodia, the 2018 Kampot Readers & Writers Festival (KRWF) has been cancelled, but festival organisers say it will return in 2019 as a biennial event.

Festival founder and director Julien Poulson gave a number of reasons for the cancellation. ‘I feel that the current social climate in Cambodia is not conducive to the presentation of KRWF and the kind of “open conversation” that is desirable in presenting a diverse and robust program of arts and culture,’ he said.

KRWF had problems obtaining official permissions for the 2017 festival, but received approval at the last minute, which ‘placed KRWF in a risky and unpredictable position,’ said Poulson.

Another factor in deciding to cancel the festival was the death of his wife Kak Channthy. Poulson said he had ‘been devastated’ by the loss of Channthy after a car accident this year. Poulson said he will dedicate more time to support Channthy’s legacy and the young family she leaves behind.

According to Poulson, the festival has ‘enjoyed the support and backing of Cambodian officials as well as broad support from many individuals and organisations in Cambodia and internationally’.

The couple had conceived the idea of KRWF when they were guests of the Ubud Writers Festival in 2012. Channthy was a singer in the band Cambodian Space Project, for which Poulson is lead guitarist. The band had contributed to the inaugural KRWF in 2015, by covering staging and presentation expenses and bringing together guests, volunteers and sponsorship.

Since non-government organisations in Cambodia first issued a joint statement in 2015 calling for the government to end its clampdown on freedoms of expression, assembly and association, the Phnom Penh Post reported in April that Cambodia had dropped 10 places in the World Press Freedom Index.

To learn more about the festival, and stay up-to-date with its planned return in 2019, see the website.