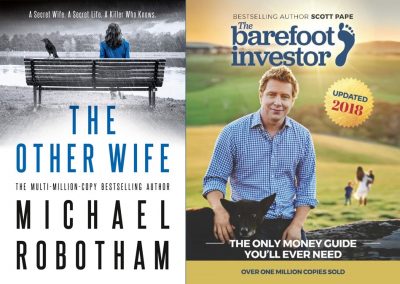 ‘The Other Wife’ and ‘The Barefoot Investor’ top Australian charts

Mega-selling author Michael Robotham’s latest crime-thriller The Other Wife has debuted at the top of the Australian fiction bestsellers chart for July. It’s joined in the top 10 by three other June releases: Christian’s White’s debut thriller The Nowhere Child; Liz Byrski’s A Month of Sundays, about an online book club whose members meet face-to-face for the first time; and Trent Dalton’s debut novel Boy Swallows Universe, a coming-of-age story set against the street-level drug trade in 1980s Brisbane. The two debut novels have attracted significant international buzz, with The Nowhere Child selling into numerous territories prior to publication and Boy Swallows Universe securing a global publishing deal with HarperCollins.

A new edition of Bruce Pascoe’s multi-award-winning nonfiction book Dark Emu has entered the Australian nonfiction bestsellers chart for July. Dark Emu argues against the ‘hunter-gather’ history of Aboriginal Australians with evidence that Aboriginal people across the continent were using domesticated plants, sowing, harvesting, irrigating and storing. Pascoe, who was awarded the Australia Council Award for Lifetime Achievement in Literature earlier this year, is currently writing an Indigenous travel guide book for Hardie Grant Travel.