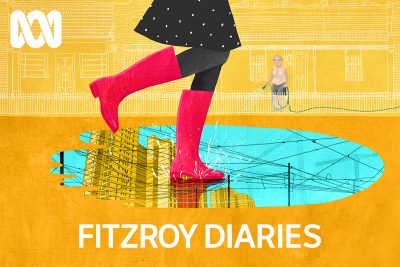 Launched in mid-2018, The Fitzroy Diaries (TFD) is ‘a hybrid between the radio play format, the audiobook format, and the podcast format’ that originally aired as part of ABC Radio National’s Life Matters. With its first season spanning eight episodes, each tells the story of different characters living in the community of Fitzroy, Melbourne, played by a cast of Australian actors and narrated by TFD’s writer and creator, Lorin Clarke. ‘Podcasting is more like live theatre, I think, because the audience is right there,’ Clarke says, of how it might differ to commercial or community radio.‘[People who are listening] feel close and connected to the podcasts they like and they can quite easily reach out and talk to you about it.’ Clarke spoke to Books+Publishing for our ‘podcast spotlight’ series.

It’s observational fiction—an affectionate ode to the inner-Melbourne community of Fitzroy—told over eight episodes. A little bit funny. A little bit sad. Told from the perspective of a narrator watching the people who make up the changing community around her. The series stars Jack Charles, Caroline Craig, Joel Davey, Alexandra Hines, Luke Ryan, Nyawuda Chuol, and Stewart Farrell. I play the narrator. 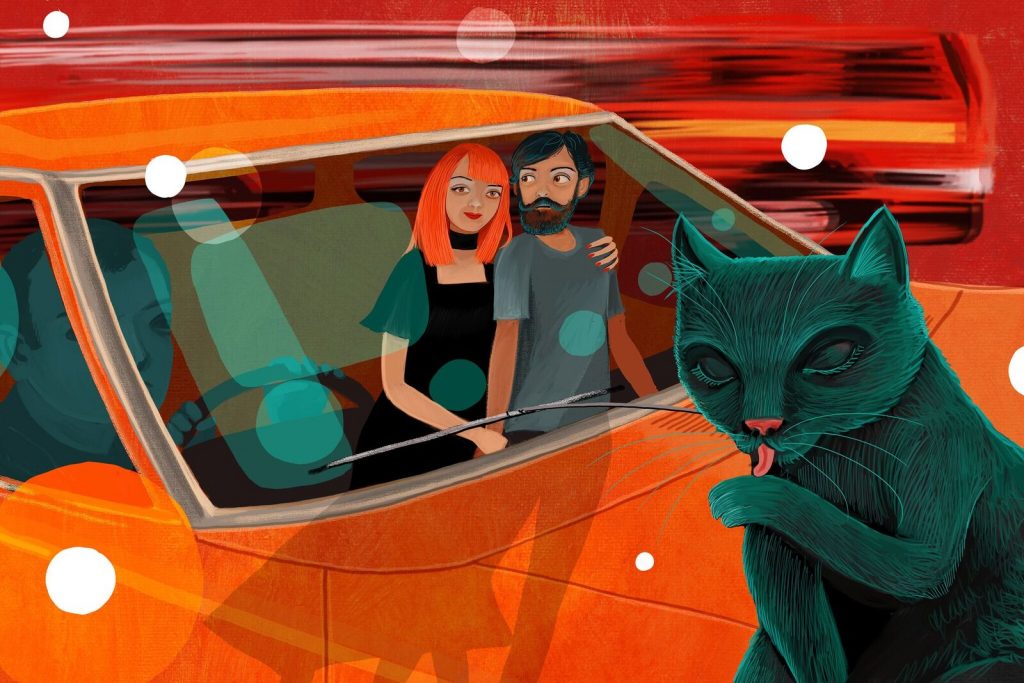 I was commissioned by the ABC to make The Fitzroy Diaries. Prior to that, the ABC hadn’t commissioned any audio fiction for a long time, so it’s certainly out on its own in that sense. It’s also stylistically unique in that it’s written from the perspective of a narrator, whereas in an audiobook the narrator would read the characters speaking as well as the narration. And whereas in a play there would be no action read aloud, in The Fitzroy Diaries my narration tells the story, with each character played by a different actor. In that sense, The Fitzroy Diaries is a hybrid between the radio play format, the audiobook format, and podcast format (the episodes are 15-minutes long and in eight parts with a second series to come). 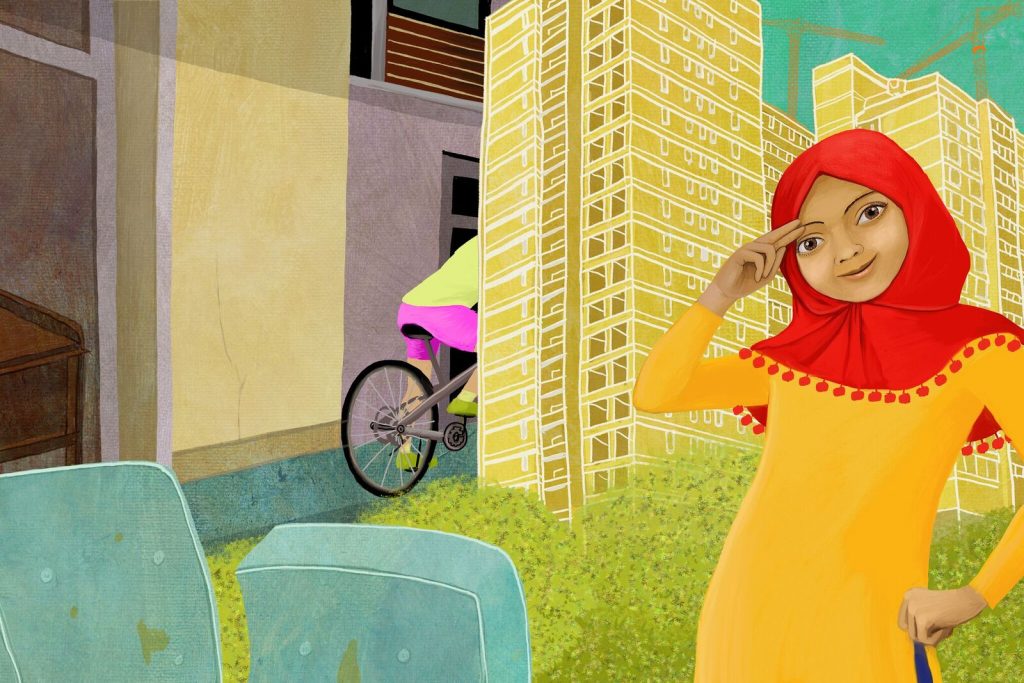 I’ve been co-presenting a podcast called The Stupidly Small Podcast with the excellent Stewart Farrell for about four years. It’s entirely different from The Fitzroy Diaries: studiously underproduced, completely unplanned and, until recently, recorded and released daily. I also have a background in radio (I’ve worked in commercial radio, community radio, and at the ABC) but podcasting is more like live theatre, I think because the audience is right there. They feel close and connected to the podcasts they like and they can quite easily reach out and talk to you about it. 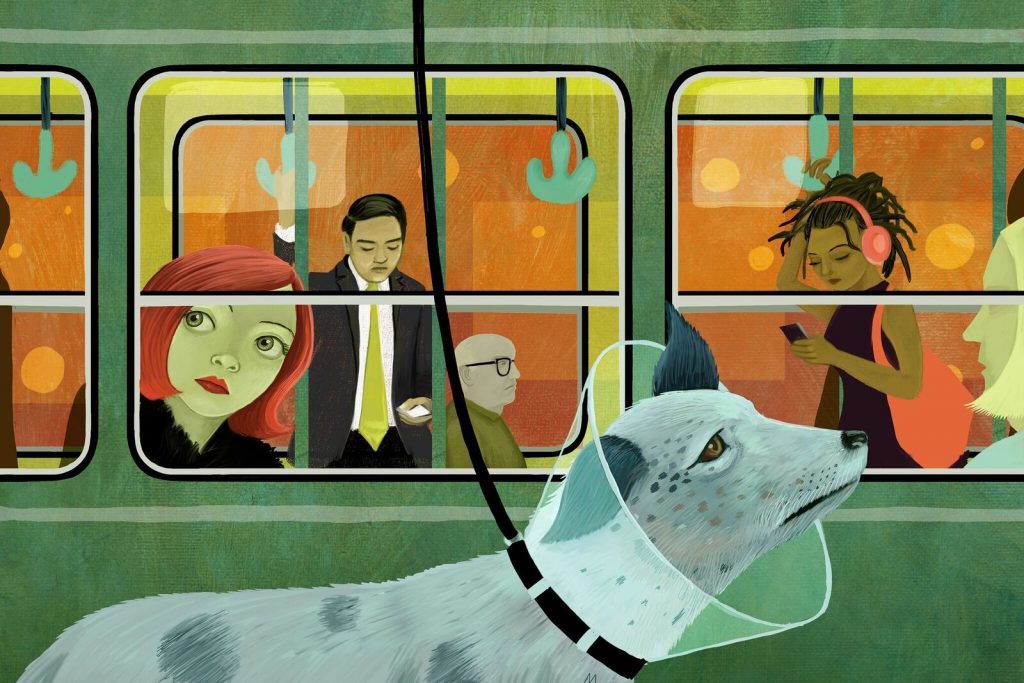 The Fitzroy Diaries is an ABC podcast so we were super lucky to have access to the ABC radio studios in Melbourne for the recording period. Sophie Townsend, who produced and script-edited the series, designed a schedule that involved performers coming in to read alongside me (I narrate the series). That was great because it was genuinely collaborative.

There would always be a producer in the booth with Richard, the sound recordist, and we would always check in and see if everyone was happy with that last bit. The performers hadn’t rehearsed together, so we got used to each other as we went along. Sometimes if you listen hard you can hear me coming in off the back of another performer’s line and you can tell from my voice that I’m grinning at how well they just did it. It was a pretty thrilling experience.

After that, the magic of production happened mostly in my absence. Sophie and the sound designer, Mark Don, whom I’ve never met but who I definitely owe a drink, put together all the music and the edits and the sounds in Sydney. They did an astonishing job. There were ten performers plus some helpful ABC employees who read the odd line as a favour. 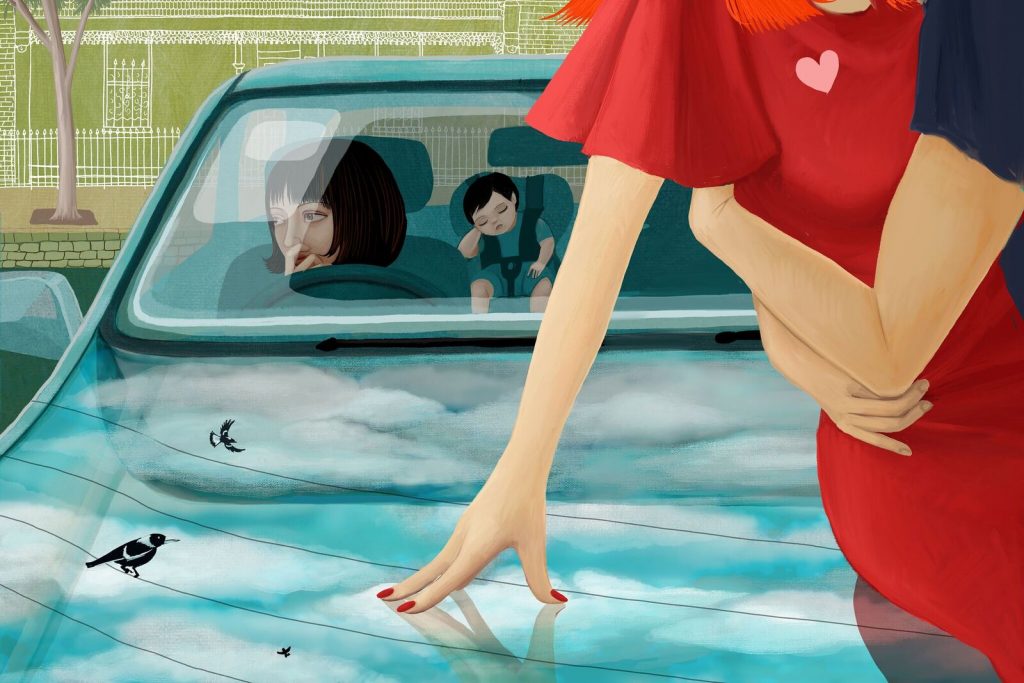 As usual with podcasting, this is one of the difficult things to answer. The metrics are a bit of a mystery. The best measure of such things seems to be the way people respond on social media. A lot of people have been in touch from overseas or from the country or by the sea or Queensland up a mountain or something.

I had hoped people who weren’t familiar with Fitzroy would listen because it’s the community that’s at the heart of the series, not the place. I’ve been so pleased to discover that people have been listening everywhere. Podcasting is great like that. 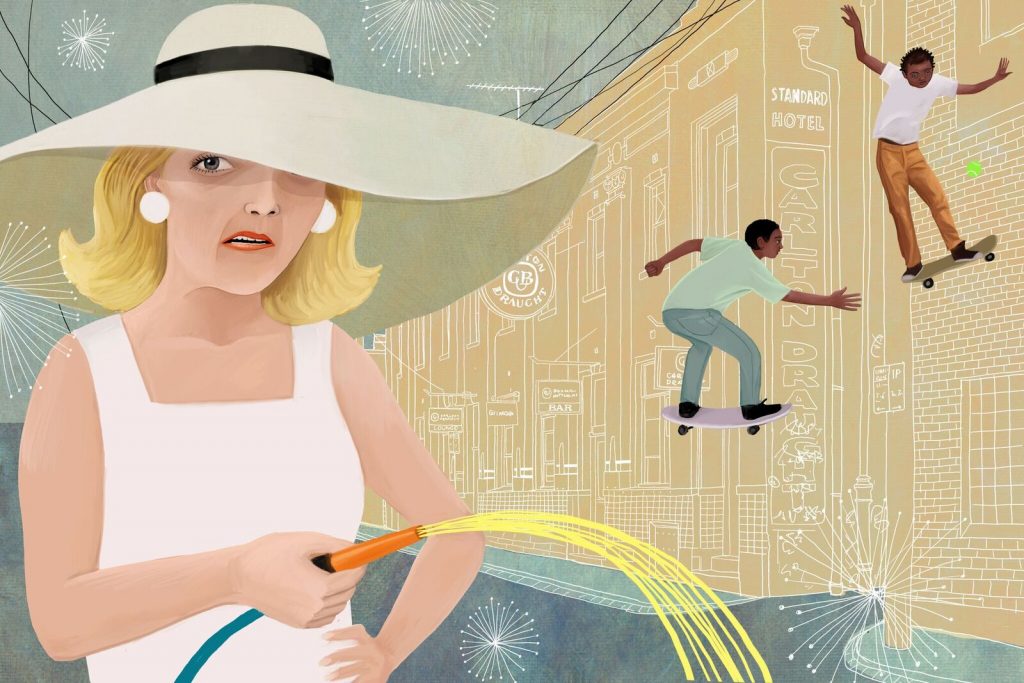 Working with Jack Charles was a rare privilege. He played the role of Alan, the bloke up the road who always stands out the front of his house, shirtless, watering the garden. As he performed it next to me—kind of lilting and strange and formal and vulnerable all at once—the Alan in my mind dissolved into the shape of Jack Charles. I can’t imagine him any other way now.

I’d like to think there’ll be more audio fiction. It’s starting to happen elsewhere, and I think in Australia there’s a lot of scope for it. It’s an incredible medium to write for, and people are used to listening intently to podcasts, so it’s a wonderful way to experience writing as well. 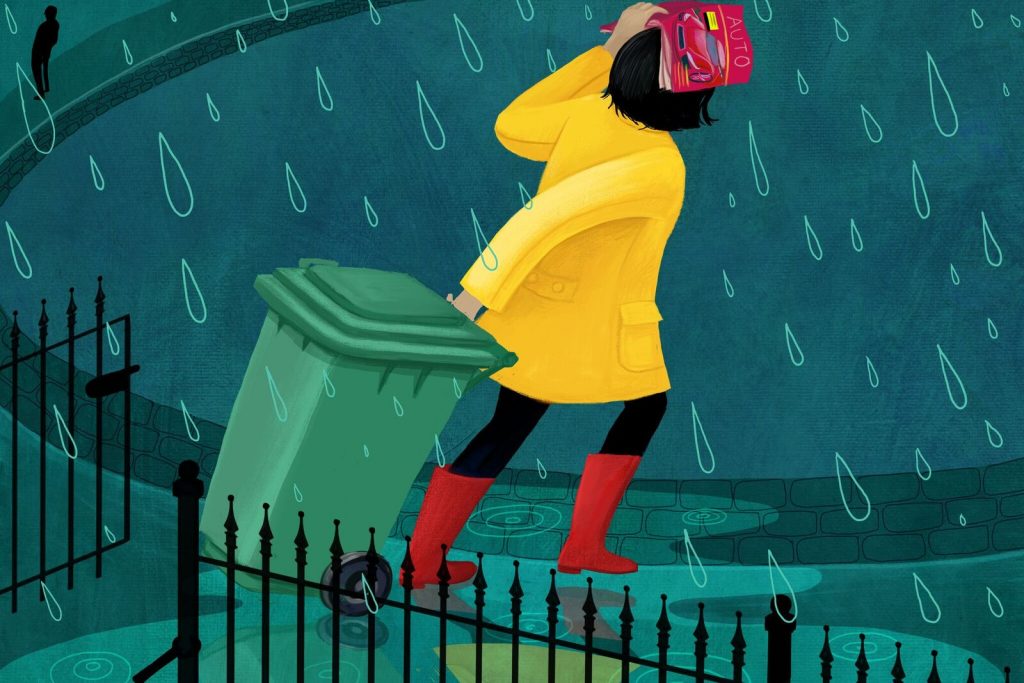 This answer is a cliché now but … as a mode of delivery, it’s pretty hard to go past. You find a few you like, you listen to them when you want to, and you curate your own audio experience. Ideally, nobody plays ads you hate, nobody comes on and does a show about left-handed gardening equipment when you’re a passionate right-handed hockey-player.

I think there’s something a bit sad about that, too, because sometimes radio can catch you in the car telling you something you never saw coming, or giving you a perspective you didn’t curate. The world could use more of that, but I also think there are lots of podcasts that give you similar experiences these days, now that everyone’s doing them.

The reason people are drawn to making podcasts is that it gives them a rare opportunity to establish and maintain a direct relationship with their audience and make the content they want to make. In large media organisations, the person in charge of audience data and social media is rarely the person who wrote the thing, recorded the thing and edited the thing. Also, they have to convince someone to let them make stuff. In podcasting, there’s more scope for a two-way relationship to happen between you and your audience and you can be 100% committed to your idea, which hopefully means people with similar interests will be more drawn to it. 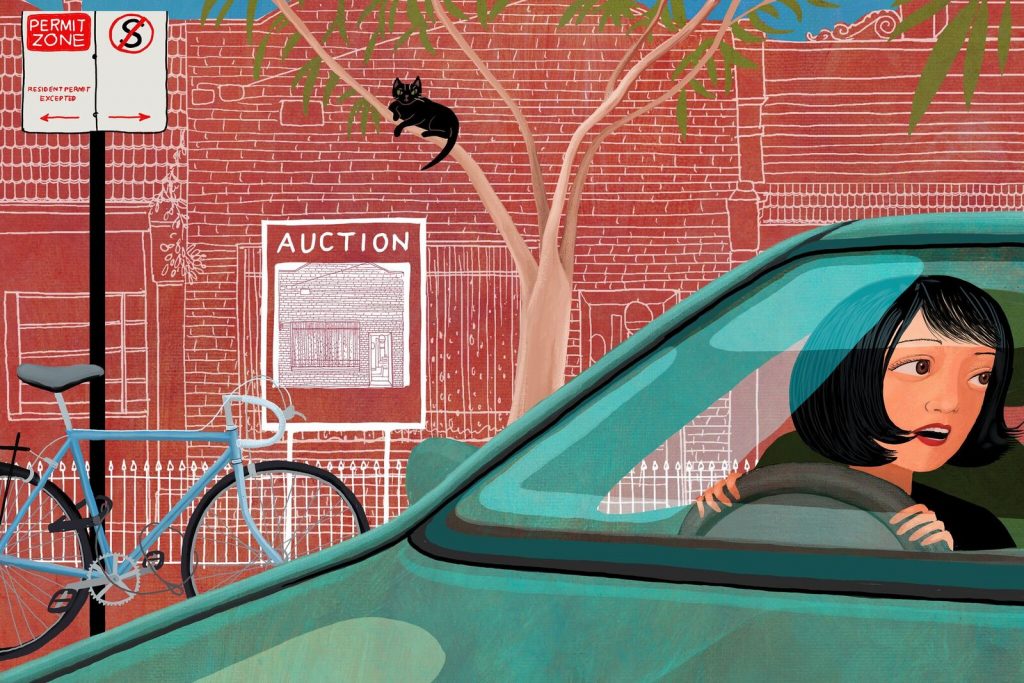 How do you fund your podcast? Do you have plans to explore other funding options?
This one was funded by the ABC and we’re working on series two at the moment. In my work with Stew Farrell on The Stupidly Small Podcast, we used to have sponsors in order to help cover the costs of running it. The question of how to run a profitable podcast has got to be one of the most asked questions in contemporary media surely.

What plans do you have for your podcast going forward?
Series two is being written right now. I’m having to move the story on a bit from series one while still maintaining fidelity to the tone and the themes. It’s a pleasure to write, especially with the feedback from listeners and the voices of the performers in my head. 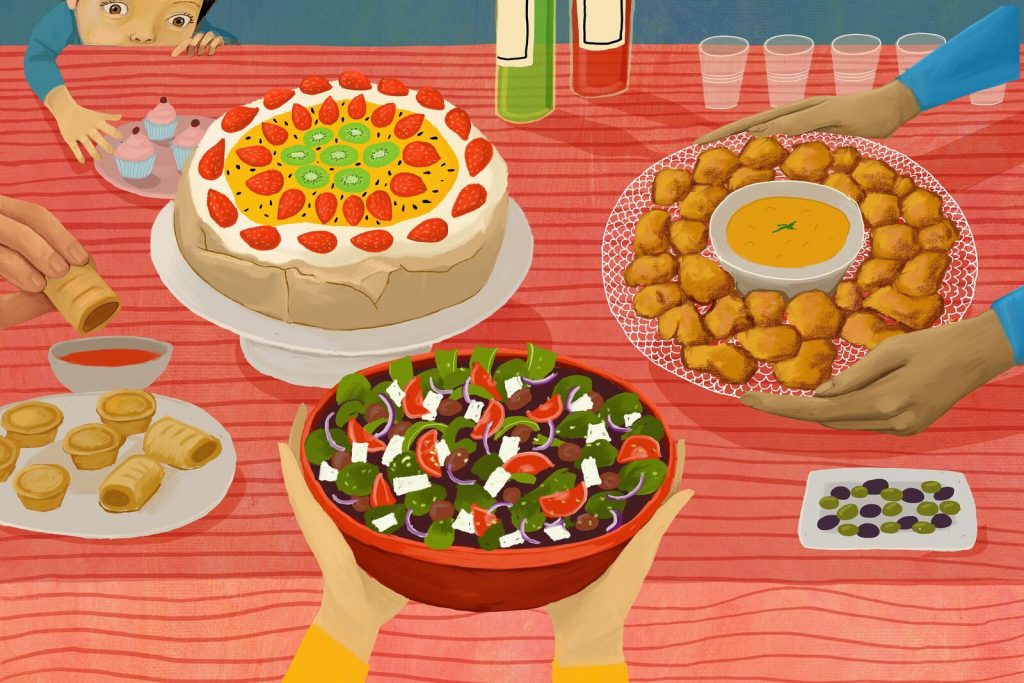 What other bookish podcasts (or podcasts for people who love reading, writing and sharing ideas!) should we be listening to, Australian or otherwise?
I adore the New Yorker Fiction Podcast. I know that’s not very edgy of me, but it’s just plain good. Deborah Treisman, the literary editor of the New Yorker introduces a contemporary author whose work has been published in the New Yorker, who is about to read a story from the magazine’s archives.

They both chat awkwardly about what they like about the story and why they chose it, and then the author reads the story. At the end, they come back on and discuss it. To me, the experience goes like this: either it’s an author I like reading an author I like, which is wonderful, or I like one of them and am introduced to another, or I’ve never heard of anybody and get a thorough education.

Beforehand, I form thoughts about the story before it happens, then I hear it, and, if I’m being honest, I often think ‘what on god’s green Earth was that about?’ at which point the author and Treisman come in and explain it and I feel it’s all clicking into place. It’s like an education and a conversation and story time, all while you’re doing the dishes.

(All featured artwork for The Fitzroy Diaries by Sonia Kretschmar)

To have upcoming interviews delivered straight to your inbox, and to stay up-to-date with Australian book-industry news, sign up to our Weekly Book Newsletter. To access all of Books+Publishing’s features, news and interviews, purchase a subscription here.