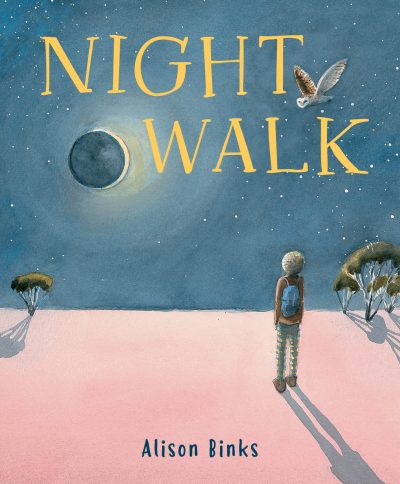 This second picture book from Melbourne artist Alison Binks will appeal to gentle souls. In Night Walk, a young boy named Caspar enjoys a night-time adventure while camping with his family. The landscape he explores seems to have a life of its own and as he wanders through it, Caspar reflects on the wider world around him. Binks is interested in the things that connect us: her story is full of echoes, large and small. Caspar’s unzipping of his tent at the book’s opening is later mirrored by a wombat poking its nose out of its hole, while a discarded snake skin reminds him of his friend Levi, who is revealed to be having an adventure of her own in the book’s final pages. Binks’ artwork has a timeless feel, and as a storyteller, she has a distinctively lyrical voice. While the story is suitable for ages three and up, the meditative tone of the storytelling and Binks’ sophisticated language will likely appeal more to an early-primary readership. By depicting Caspar as an experienced bushwalker—he always wears a whistle around his neck and can recognise an echidna’s trail—Night Walk may also inspire and educate children wishing to go on night walks of their own.