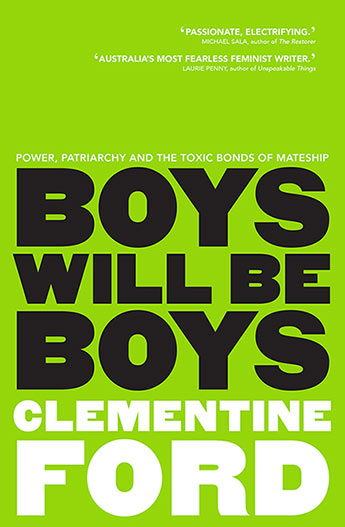 Ford’s ‘Boys Will Be Boys’ optioned for TV

Clementine Ford’s forthcoming Boys Will Be Boys: An Exploration of Power, Patriarchy and the Toxic Bonds of Mateship (Allen & Unwin, October) has been optioned for television by Perth-based production company Metamorflix. Rights were sold by Jacinta di Mase at Jacinta di Mase Management and Natasha Solomun of The Rights Hive.

‘Metamorflix has always been interested in working with writers who have something significant and powerful to say about contemporary life in Australia and beyond. So, when the opportunity to work with Clementine Ford presented itself, we were determined to take it,’ said Metamorflix head of development Mike Bluett. ‘Having secured an option on Clementine’s forthcoming book—Boys Will Be Boys—we are now developing it as a potential series for the ABC in Australia and Netflix globally. Our hope is that a series will bring an even bigger audience to the work of one of the most potent and necessary voices working today.’

Ford, whose first book Fight Like a Girl (A&U) was released in the US and UK in August through Oneworld, said that in Boys Will Be Boys she hoped to ‘continue the conversation that was started with Fight Like a Girl’.

The forthcoming title sees Ford addressing ‘stereotypes around what masculinity is, how toxic masculinity plays out, and the harm that can be caused not just against girls, but also against boys by perpetrating these ideals of brotherhood and boys colluding with one another’.

‘I want us all to be able to work towards creating a better world and this is the next step, I believe, in that conversation,’ added Ford.