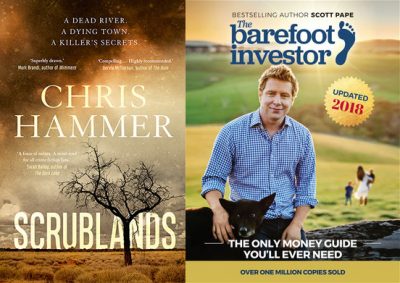 Chris Hammer’s crime-fiction debut Scrublands—which has been sold into numerous overseas territories and optioned for television—has debuted in first place in the Australian fiction bestsellers chart for August. Scrublands is set in a drought-ridden regional town in Australia and follows a journalist’s investigation into why a priest shot down five of his congregation a year earlier. The other new entry in the fiction bestsellers chart is Kayte Nunn’s historical novel The Botanist’s Daughter.

Local health and wellbeing titles are frequently in the Australian nonfiction bestsellers chart. Selling strongly in August are Luke Hines’ recipe book Smart Carbs, which attempts to demystify different approaches to carbohydrates and dieting; and The Busy Mum’s Guide to Weight Loss from the Healthy Mummy website founder Rhian Allen.