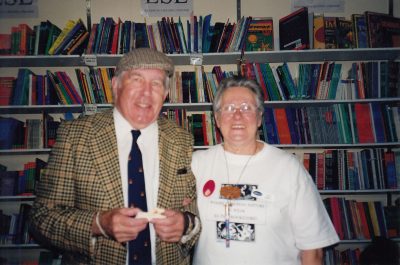 Tony and his wife, Pauline, came to Australia from England as ‘ten-pound poms’ and settled in Hobart, where Catt worked at the Diocesan bookshop attached to the Anglican church.

Catt later moved to the Sydney suburb of Woolwich, where he worked for publisher and distributor J M Dent, which was subsequently bought by US publisher Houghton Mifflin. Catt worked as a sales rep for both J M Dent and Houghton Mifflin lists through the 1980s, until he left in the early 1990s to become an agent.

Shawn Casey, of wholesaler and online retailer The Cookery Book, said, ‘He was a great storyteller, quite humorous with a lot of stories.’ Eddie Coffey from distributor Peribo said, ‘He always had a joke … he had a wonderful sense of humour,’ and remembered that Catt always proudly participated in the Anzac Day parades.

Eve Abbey, who co-founded Sydney’s Abbey’s Bookshop with her husband Ron Abbey in 1968, said that Catt was ‘a great supporter’ of Abbey’s and independent booksellers generally. ‘He was one of the most entertaining reps in the book trade and was always there to help everyone,’ said Abbey.

Pictured: Tony Catt and Eve Abbey in 1998, at the 30th anniversary of Abbey’s Bookshop. Image courtesy of Eve Abbey.