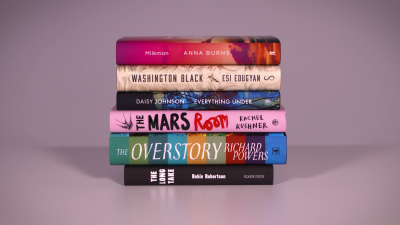 The shortlist for the 2018 Man Booker Prize has been announced.

Chosen from a longlist of 13, the shortlist is dominated by women, with four out of the six titles by female authors. The list also includes two significant debuts: Everything Under by Daisy Johnson who, at 27, is the youngest-ever author to make the shortlist, beating out Eleanor Catton who was 28 when she won the 2013 prize; and The Long Take, which is the first novel in verse to be shortlisted for the Booker. The shortlist also includes Washington Black by Canadian author Esi Edugyan, who is the only writer on the list to have been shortlisted previously; her novel Half-Blood Blues (Serpents Tail) was shortlisted in 2011.

In the fifth year of the prize being open to writers of any nationality, the shortlist contains three books by UK authors (Burns, Johnson, and Robertson), two books by American authors (Kushner and Powers), and one book by a Canadian author (Edugyan).

Chair of judges Kwame Anthony Appiah said all six finalists are ‘miracles of stylistic invention … yet in every other respect they are remarkably diverse, exploring a multitude of subjects ranging across space and time’. Appiah said: ‘Each one explores the anatomy of pain—among the incarcerated and on a slave plantation, in a society fractured by sectarian violence, and even in the natural world. But there are also in each of them moments of hope.’

The winner will be announced on 16 October and will receive a cash prize of £50,000 (A$91,090). Each shortlisted author will receive £2500 (A$4550) and a specially bound edition of their book. For more information about the 2017 shortlist, visit the Man Booker Prize website here.