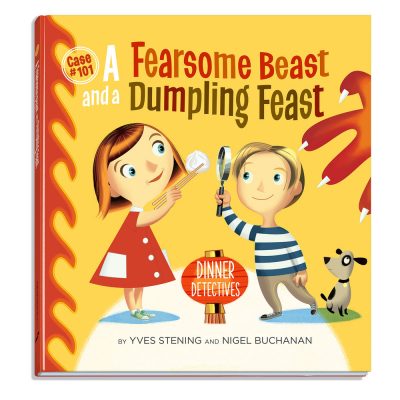 Stening and Buchanan’s pitch for their self-published picture book series, ‘Dinner Detectives’, beat pitches from four other international finalists at the competition in Cannes, France, over the weekend.

Stening said the pair aims to develop a TV series based on the ‘Dinner Detectives’ books, which seek to ‘inspire healthy eating habits in children by feeding their curiosity, making discovering new foods an adventure, not a chore’. The books follow two characters as they travel back in time and around the world to uncover stories about the food we eat.

‘We have all kinds of spin-off ideas—a game and an app and a YouTube program. But what we really want to make is a TV series,’ said Stening, adding that the success at the pitching competition has opened doors for further development and partnerships.

‘These are exactly people we need to speak to,’ he said. ‘And to get in the door for that many people would normally take you two years … By being given the tick by three major players in the world, who were the judges, people were clearly interested in seeing me.’

The ‘Dinner Detectives’ books are distributed by Peribo.