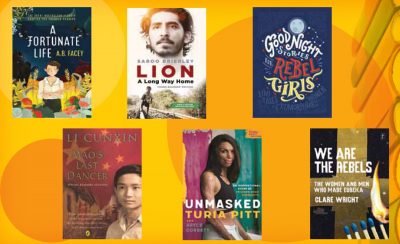 Kelsey Oldham investigates the role played by younger readers editions in the growth of children’s nonfiction.

It’s a well-established fact that adult nonfiction titles sell strongly in Australia. In 2018 this is proving true of children’s nonfiction titles too. In the US, Publishers Weekly reported that sales of children’s biographies in 2017 increased by 26% from the previous year, while sales of adult titles in the same category remained steady, and in the UK, children’s nonfiction has been the primary driver of growth across the whole category. In September 2018 the Bookseller reported a 30% increase in volume and 31% increase in value of children’s general nonfiction compared to the same time in 2017, propelled by narrative history titles such as Goodnight Stories for Rebel Girls (Particular Books), an omnibus of real-life stories of inspirational women in history. This is compared to minimal growth of the UK children’s market as a whole—up just 0.71% in value and down 0.4% in volume.

‘The juvenile nonfiction category has seen the largest area of growth in the last couple of years,’ says youth literature agent Danielle Binks, adding that what is happening overseas is generally a ‘really good indicator of what will either be sold into Australia, or just where trends are tracking’. According to Binks, narrative nonfiction is ‘a very hard genre to do well for this age-group’, which is why publishers appear to be going down a common route that has proven to be successful: that of adapting pre-existing adult nonfiction titles into younger readers editions.

There are several reasons for the growth of children’s nonfiction, including the push for STEM-related resources, and, according to Binks, a renewed understanding that for kids ‘if you can see it, you can be it’. In recent years, publishers including Text, Fremantle Press, Magabala Books and Penguin Random House (PRH) have expanded their children’s lists by adapting books from their adult nonfiction lists. Publishers agree that inclusion on school curriculums, as well as giving children the same reading options that their parents have, are integral factors to consider when deciding which books to adapt for younger readers.

‘Think about how popular nonfiction is among adults, and now ask yourself: when is that love for the form first planted?’ says Binks. ‘We’re in the business of helping turn young readers into readers for life, which is why we have to make sure we’re constantly offering them everything in the book marketplace.’

Common themes in adult nonfiction titles that make for great children’s adaptations are survival, determination, resourcefulness, endurance, and overcoming hurdles or hardships, according to PRH Young Readers publishers Lisa Riley and Holly Toohey. Turia Pitt’s Unmasked (Random House), and Saroo Brierley’s Lion: A Long Way Home (Penguin), memoirs by young people who faced incredible hardship and survived, are two recent examples from the PRH younger readers list. According to Riley and Toohey, ‘Part of deciding if an adult book will make a successful adaptation for children is that the original story involves a unique and extraordinary story or individual to start with, where a significant part of the story is about what their life as a child was like and how that shaped the person they became.’

A link to the past

Not only are younger readers editions important educational resources, but they also expose children to exciting stories and foster empathy and inspiration. This year, Fremantle Press regained the rights to A Fortunate Life, A B Facey’s 1981 memoir about growing up in rural Western Australia. One of the first things it did was release a younger readers edition. ‘For modern kids it can be hard for them to imagine what life was like for the generations that came before,’ says Fremantle Press children’s publisher Cate Sutherland. ‘This kind of text puts them in the shoes of earlier Australians, providing a connection through story.’

Historian and author Clare Wright agrees. Her award-winning history book The Forgotten Rebels of Eureka was published by Text in 2013 and adapted into a YA edition, We Are the Rebels: The Women and Men Who Made Eureka, two years later. It had never occurred to her to adapt the text for younger readers, but when her publisher suggested it, ‘it made perfect sense’. ‘One of the reasons I’d written Forgotten Rebels in the first place was because of the way that I learned about the Eureka Stockade when I was at school—as an exclusively male event—which is how my kids were still taught about it. A YA version of the book stood the greatest chance of affecting the school curriculum,’ says Wright. ‘I’ve certainly had a lot of teachers who have thanked me for writing the book because, they say, now they have the resources to teach the Eureka Stockade in a more inclusive and expansive way.’

Magabala Books publisher Rachel Bin Salleh says that the forthcoming younger readers edition of Bruce Pascoe’s Dark Emu, which argues against the ‘hunter-gatherer’ history of Indigenous Australians in favour of an agricultural history, is a ‘a natural extension of the work we’ve been doing for 30 years’. Due out in May, Young Dark Emu is aimed at an upper-primary audience, and Bin Salleh says the impetus for a younger readers edition was to start educating children at a young age. ‘Having an epiphany as an adult is too late,’ says Bin Salleh. ‘The younger the better to educate and change stereotypes. We should be building and educating this nation on its truths and not one version of it—especially from a young age.’

Riley and Toohey also note that while PRH’s backlist younger readers editions, including Mao’s Last Dancer (Li Cunxin, 2005), have sold strongly and steadily into schools year on year, they are finding that trade interest is increasing. ‘Certainly with something like Lion, where there was such a high level of public awareness of the story due to the film, there was massive trade pick up. Similarly when you’re dealing with a high-profile subject such as Turia Pitt, the sales are distributed quite evenly between mainstream book retailers and also education accounts.’

Working with the text

When it comes to adapting the text for a younger readers edition, there are many factors to consider, such as what to cut out of the original text to make it appropriate for a younger audience. Riley and Toohey say that the process is unique to each book: ‘Sometimes it might involve something unique like interviewing and recording the author talking more specifically about their childhood to glean more detail and insights … And sometimes it’s working with the author to create an entirely new manuscript. Capturing the right voice and point of view is key for a younger audience.’

Choosing what age group to adapt a book for is also important, considering that advanced younger readers or a young adult audience might just elect to read the adult version of a title, rendering a YA version redundant. ‘We need to ensure that the young readers edition is definitely pitching lower and that there will, in fact, be an audience for it,’ add Riley and Toohey. In the case of Unmasked, the publishers knew that Pitt’s personality and the nature of the story would be more appropriate for high-schoolers, so they aimed the text at readers in years eight and nine.

Some would argue that condensing a text to make it more digestible for a younger audience is taking away from the essence of the original book, but publishers disagree—cuts are mostly made to adhere to the primary storyline, removing any subplots, events or characters that detract from the main story. ‘I think pretty much any narrative history book could be adapted for younger readers,’ Wright says. ‘It’s the narrative part that counts.’ When adapting The Forgotten Rebels of Eureka, Wright’s editor cleaved away the parts of the book that didn’t adhere to the narrative through-line, and Wright connected these remaining parts with new linking prose, in language appropriate for a younger audience.

‘We’ve also found that a lot of adults read [the younger readers edition] in preference to the “big book”, as it’s less intimidating and acts as a sort of executive summary,’ Wright notes. ‘Some then go on to read the original book because they’ve unexpectedly enjoyed the YA version so much.’ This is an unexpected but not unwelcome consequence of producing a younger readers edition.

While the concept of adapting adult nonfiction for children’s audiences is by no means new, the trend continues to grow. ‘Children are naturally inquisitive and most love to learn, especially if it’s in a format which they can come to of their own accord,’ say Riley and Toohey. ‘Young readers are actually the perfect audience for these types of books.’

Wright would like to see younger readers editions of Australian history books such as Michael Cathcart’s The Water Dreamers (Text)—evidence-based accounts based on proper research and analysis. Binks hopes to see more Australian narrative nonfiction for all age groups, with a greater focus on Australian historical figures like David Unaipon and Edith Cowan.

‘The only way to combat entrenched racism, stereotypes, economic disparity, dispossession and displacement is by being proactive about content and active in our communities about our past,’ says Bin Salleh. ‘By addressing these issues, we prepare our youth for their future, as they will ultimately be our leaders.’ Riley and Toohey concur: ‘Across the world, it’s clear to see that youth activism is on the rise so it’s likely that young readers editions of nonfiction books will have more resonance than ever.’