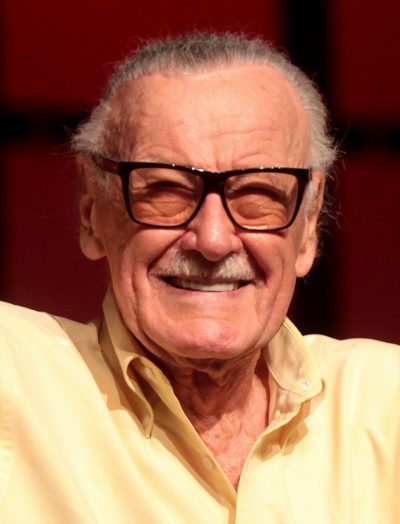 Born Stanley Martin Lieber in New York City in 1922, Lee started working in publishing aged 17, writing scripts for comic books at Timely Comics. He was promoted to editor-in-chief of Timely, the company that would become Marvel Comics, at the age of 19.

Lee is credited with revolutionising the comics industry in the 1960s, creating numerous characters for Marvel including The Fantastic Four, Iron Man, The Incredible Hulk, Thor and Black Panther. Marvel stories, unlike most previous superhero comics, were imbued with humanity, pathos, humour and awareness of social issues.

A prolific writer, Lee created and co-created hundreds of comic books and characters. Working with illustrators including Jack Kirby, Lee worked collaboratively using what he referred to as the ‘Marvel method’: he would summarise the story for artists and they could have a hand in the development of plot and characters.

In 1972 Lee became the publisher at Marvel and relinquished editorial control to pursue live action representation of Marvel comics in Hollywood. It wasn’t until the late 1990s, when Lee was named emeritus chair of Marvel, that live action Marvel superhero films began to take off. X-Men, released in 2000, was the first successful Marvel adaptation.

Marvel film adaptations including Spider-Man, The Avengers, Black Panther and Guardians of the Galaxy have made a combined US$24 billion (A$33.4bn) worldwide. In 2009 The Walt Disney Company acquired Marvel for US$4 billion (A$5.6bn).

Lee wrote two memoirs, Excelsior! The Amazing Life of Stan Lee (with George Mair, Touchstone) and the graphic memoir Amazing Fantastic Incredible: A Marvelous Memoir (with Peter David, illus by Colleen Doran, S&S), and continued to write up until his death.