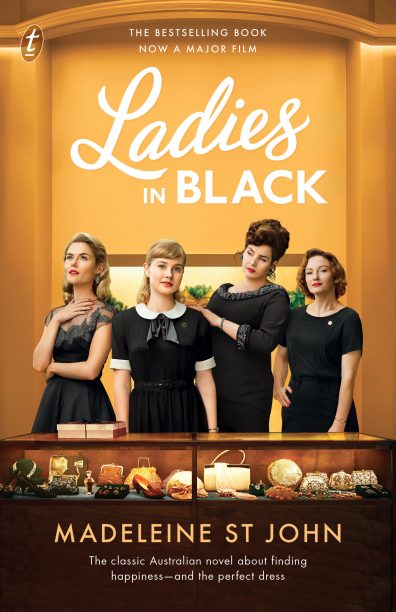 Madeleine St John’s The Women in Black was in hot demand at the Frankfurt Book Fair this year after Text Publishing recently acquired translation rights. The coming-of-age story set in a department store in Sydney in 1959 has been adapted into a feature film called Ladies in Black. Think Australian spoke to Text Publishing rights and export coordinator Khadija Caffoor.

How would you pitch The Women in Black?

The Women in Black is the coming-of-age story of a young woman who takes a summer job on the fashion floor of a department store in Sydney in 1959. Readers fall in love with this book for its charm, wit and the sheer pleasure of reading it—Hilary Mantel has described it as the book she most often gives ‘to cheer people up’, and Jane Gardam, Helen Garner and Clive James are among its many other fans.

We had a huge response to the novel in Frankfurt, and the international bidding began immediately following the fair. We have sold it at auction in France to Albin Michel, at auction in Holland to Nijgh & Van Ditmar, and in a seven-way auction in Italy to Garzanti. We have also sold it to Tchelet in Israel, and are holding offers in Spain. The international deals so far have also included sales of Madeleine St John’s three other novels.

How has The Women in Black been received in Australia?

In Australia, we have sold 50,000 copies in all editions since we republished it in 2009, and it is now part of our Text Classics. The recent film adaptation, Ladies in Black, directed by Bruce Beresford, has done extremely well at the Australian box office.

The Women in Black was first published in 1993. What has led to this renewed interest?

The Women in Black is a funny, subtle examination of the female experience and a sharp commentary about a woman’s place that highlights female strength and friendship. It is about the everyday, about connection and love, and this resonates strongly today. As Hilary Mantel has said, this novel ‘shows how the ordinary can be transfigured’.

Why do you think this novel will appeal to international readers?

The Women in Black fits the trend for uplit, while dealing with universal ideas of feminism, immigration and intolerance. Its setting is one that is instantly recognisable and specific, with all the glamour of the 1950s and designer gowns, but it is also a story about all the hopefulness and promise of youth—an irresistible combination!