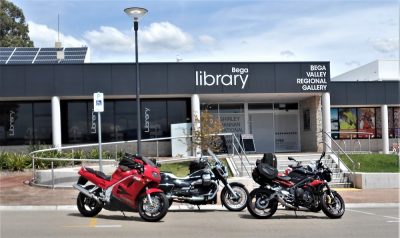 Between 8-11 November the group visited libraries in the towns of Gundagai, Tumut, Cooma, Bega, Bombala and Tura Beach.

‘We’re hoping to encourage younger people to see librarians in a different light,’ said Biblio Turismo team leader Alan Flores. ‘And it’s about raising the profile of country public libraries and their important place in the communities they serve.’

The group began in 2006 as a way for rural motorbike-riding librarians to network with each other and has become an opportunity for rural libraries to publicise their services.

This year’s tour was nostalgic for Flores, because he was the first librarian for the Bega Valley Shire, after helping to set up the original library service in 1975.

See more about the tour on the Biblio Turismo’s blog.